What Was The Biggest Nigerian Song Of 2019? || Viewers Choice

Previous: Rihanna’s Billionaire Ex Boyfriend Begs Bloggers To Take Down Pictures Of Together
By Tomiwa | Jan 22, 2020 | 17:41 - Leave A Comment 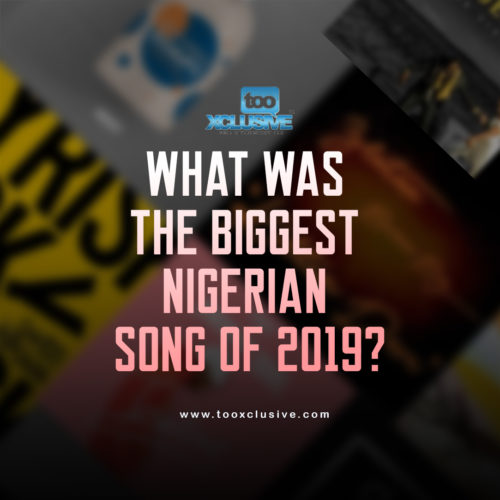 2019 recorded lots of hit songs from your favourite top A list artistes, other list acts and the newbies. Banging songs rock the year each month from January to December. There was never a dull moment!

Burna Boy’s joint with Zlatan ‘Killin Dem‘ was strong all through the year, killing the charts from January – December. Fireboy and Joeboy later came with ‘Jealous‘ and ‘Baby‘ respectively then T Classic joined in also with ‘Nobody Fine Pass You‘. Around same period Mavin introduced the new kid Rema who took over the chart with ‘Dumebi‘. Then Peruzzi blew things up with ‘Majesty‘ a song most can’t get over even till today.

Rudeboy came in with his strong hit song ‘Reason With Me‘ while Burna Boy followed up his hit CV with ‘Dangote‘ and ‘Anybody‘. King of the street Olamide also hit us with “Oil & Gas” (Enu gbe) before Naira Marley surfaced to take over with ‘Opotoyi‘ & ‘Soapy‘ which hit worldwide all through 2019.

Later in the year Davido stole the show with ‘Blow My Mind‘ featuring Chris Brown and “Risky” featuring Popcaan. Wizkid also had his own share with ‘Joro‘ and Teni locking the year down with her late single “Billionaire“.

There were lot of great songs in 2019 which made picking the ‘Song Of The Year’/’Biggest Song of 2019’ a real big deal. But nevertheless there has to be just one Best song from the list of great hit songs which made us leave it for you guyz (the fans) and made it a viewers choice…

Peep the video below to see some fans favourite and biggest song of 2019 and also drop your own best song of 2019 in the comment section below. Let know which song is topping and will get the 2019 Song Of The Year Award/Badge.