Who Should Be Praised For Redefining Afrobeat, The Artistes Or Producers?… My Thought 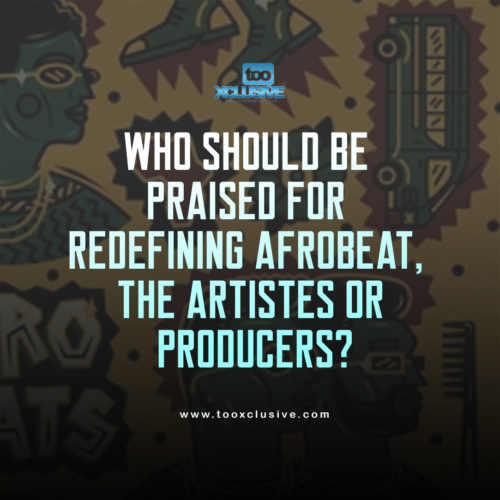 For so years, the topic of who truly redefined Afrobeat has plagued the minds of many music fans. Artistes have been given the accolades forgetting that there are some geniuses behind their many hits.

Burna Boy brought the topic back when he made the headlines after he claimed to be best after Fela and that nobody paved the way for him. “FACT! I always knew I was and I am THE BEST. Everyone you think is the best KNOWS I’m BEST since Fela Kuti. But @timayatimaya told me something a long time ago that made me not care about being the best. “The World can do without the Best” the world will still spin regardless,”

His statement made majority of Nigerians to call him proud and arrogant but that is a topic we would not be delving into so as not to digress from the main point of this article.

We forget that it’s not only the artiste that does the job, an entire team put in a lot of work just for a song to be a hit. Producers have over the years played a vital role in making music. The works of these producers have served as the foundation for some of the biggest Afrobeat records that the continent has ever seen.

Who is a music producer?

A record producer or music producer oversees and manages the sound recording and production of a band or performer’s music, which may range from recording one song to recording a lengthy concept album. A producer co-writes, proposes changes to a song’s arrangements and also coaches a singer in the studio.

The role of a music producer can be also a controversial one as they can not only help make but also break a musician’s sound. The list of their roles are endless but sadly their roles are overlooked. They are usually the “unseen guys” so the accolades goes mainly to the artistes . Taking a look at some of the biggest Afrobeat songs, you’ll discover that producer are the real geniuses.

Notwithstanding artistes themselves also play big roles as some artistes not only write but also produce their songs – they are called “Triple Threats“. In a recent interview, Nigerian fast rising act, T-Classic revealed that Killertunes helped change his sound because he sounded like Wizkid (everyone is tired of singers sounding like Wizkid). He added that the producer coached him and put him through on how he should deliver his lyrics.

Even Legendary late King of Pop, Michael Jackson had the help of his producer, Quincy Jones to make his albums become hits. Likewise Wizkid who had the help of Samklef for his debut (hit) album “Superstar”, The likes of Masterktaft, Tekno, Samklef, Shizzi, Killertunes, Sarz, Spellz, Speroach, Maleek Berry, Phantom and others have done a magnificent job in redefining Afrobeat. They have been able to reinvent Fela’s original sound into something much more unique and consumable to music lovers.

This writer believes that music producers should be given more accolades than they normally receive. However, this article is based on the opinion of one human being (before ya’ll come for me) and to hear out the opinions of TX  readers, this has brought us to ask Who Truly Redefined Afrobeat (to the sound that is now been accepted and sampled worldwide)… is it the Artistes or the Producers?

We would love to know your own take, Kindly Drop Your Thoughts in the comment section below;

“Who Should Be Praised For Redefining Afrobeat, The Artistes Or Producers?… My Thought”, 5 out of 5 based on 3 ratings.