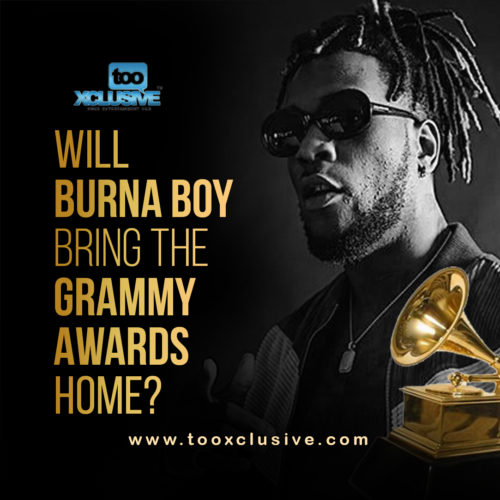 Burna Boy aka OluwaBurna is no doubt the hottest artiste at the moment. He got his well deserved recognition in 2018 at a long year run in the music industry. 2019 crowned it all for him when he got the 62nd Grammy Awards nomination.

Burna Boy started 2019 with the release of hit songs back to back. Towards the mid year he released his fourth studio album ‘African Giant‘ which did wonders and gained massive streams in 2019. Just when we thought Burna Boy’s achievement was done for the year, Grammy Awards came with its recognition. The ‘African Giant’ album was nominated for ‘Best World Album’ at the Grammy Awards 2020. This was a huge one for Burna Boy as he became the first to be recognised by Grammy ahead of Wizkid and Davido.

The Grammy will be holding tomorrow Sunday, 26th of Janaury and Oluwaburna is all set for the great music event.

Do You Think He Will Bring The First Artiste To Bring Home The Grammy Awards?