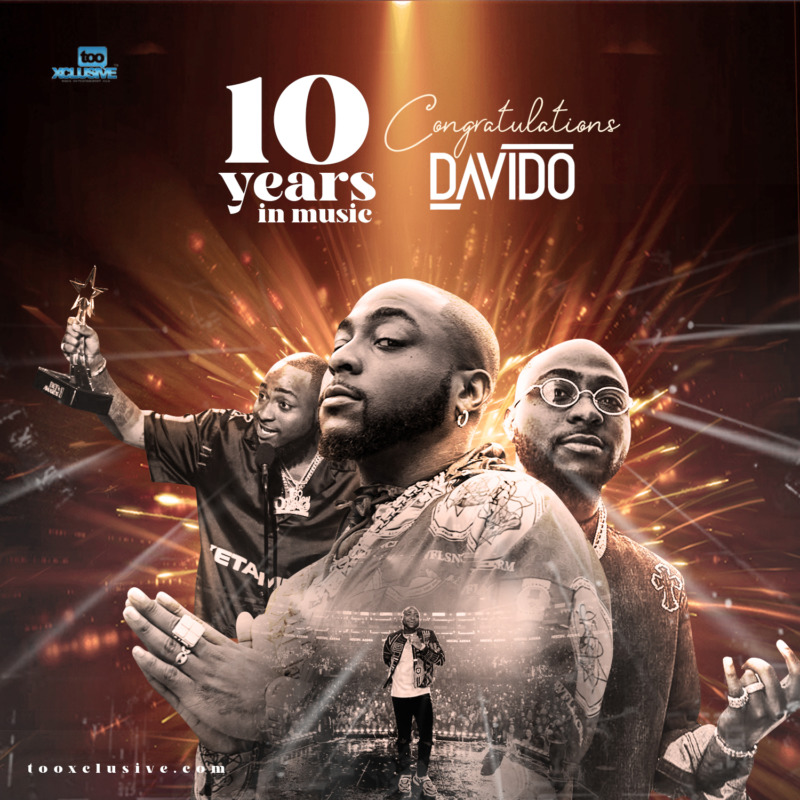 #Davido At 10, Nigerian Superstar Davido blends traditional African elements with global mainstream pop for a sound that’s equal parts intriguing and infectious. He has been in the music industry for 10 years and has maintained consistency in giving hit songs.

Born in Atlanta, Georgia (U.S.A), but brought up in Lagos, Nigeria; Davido has been producing music since the tender age of 13. After a few self-taught lessons in various studios, he began to explore the depths of music while in high-school as a member of a minor music group. Keeping his eyes firmly on the ball, Davido began lending his talents to many up and coming artists based in Nigeria including Dammy Krane, NPZ and more, truly defining the Afropop and Afrobeat sounds.

In 2011, Davido Debuted with the track ‘Back When‘. On the beat… On the beat is Davido! More than opening lines to his smash hit debut which teared up club scenes all over Nigeria, ‘Back When‘ (featuring Naeto C), announced the deliverance of a rawly talented young man to the Nigerian industry on the 9th of May, 2011. He later followed this single up with the Mega Hit Song – “Dami Duro”.

A multi-talented triple-threat; the singer, songwriter and producer (who owns the DMW; Davido Music Worldwide record label) is indeed the Baddest!! (In Nigeria & Africa). He quickly grew from club-ready early songs to charting tracks and features from big names like 2face, Ice Prince, Olamide, Nicki Minaj, Lil Baby, Nas, Chris Brown, Young Thug and many more. The award-winning singer has gained recognition worldwide by becoming arguably the greatest Africa has ever produced.

With 3 Albums (‘The Genesis‘; Omo Baba Olowo, ‘A Good Time‘, ‘A Better Time‘), Over 1 Billion YouTube Views and 1.5 Billion Streams across all streaming platforms, The name Davido is a stronghold of many other superstars And it’s worthy of Praise. (Check Him Out HERE)

Congratulations Davido! Happy 10 Years On Stage (As a recording and performing artiste)

Are These The 10 Best Davido Songs ‘Ever’?

You can share your thoughts with us… And also send in your Wishes in the comment section.