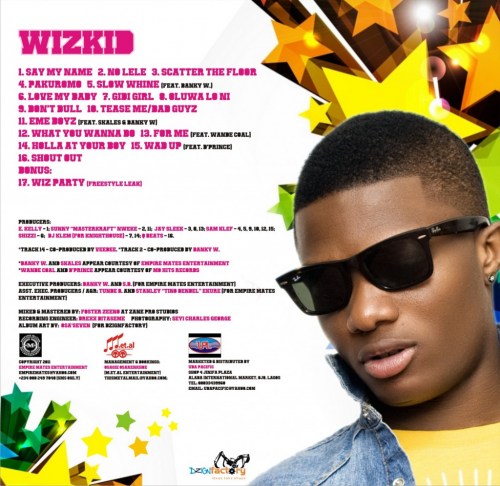 First, Wizkid’s promotion team deserves a standing ovation for a job well done on his album release concert on June 12 at Eko Hotel. They did not do that much to loud the album release on Friday June 10 yet the streets looked forward to it. If post record sales were functional in Nigeria, SUPER STAR would have sold out before the copies arrive.

I got the album as soon as my vendor got it off Uba Pacific (marketers of the album) on the release date. Most people do not pay attention to album sleeves, well I do and I think it should have been better – from the concept, photography to the design.

On the inside – SUPER STAR… not a creative title for an album yet it fits the artist in question. For many fans, Wizkid strikes as one up and coming artist who hit limelight from nowhere but on the contrary, this ‘Kid’ has been around for a while and has gone through the hard process of survival in an industry that lacks basic structure.

In my opinion, SUPER STAR by Wizkid is an easy album to review. Start by separating the earlier released singles and the other songs on the album to find the contrast. The choice of the promoted singles: “Don’t Dull”, “Tease Me” and “Holler At Your Boy” was quite genius because they were certified hits which made him a superstar already. I don’t see any other song on the album growing bigger than the mentioned songs. Although tracks like “Say My Name”, “Pakurumo”, and “Wad Up” comes close but not enough to drown any of the latter. On a second thought, listeners’ perception varies so it’s up to you.

Weighing Wizkid’s energy on this project, I see a jolly good fellow, who is just having fun with the flow. He goes a bit sentimental on “Oluwa Lo Ni” and touches his roots in “Wad Up”. His lyrics are basic…not in a bad way but makes communication as direct as possible. Not a lot of artists were featured on the album but the featured acts: Banky W, Skales, Wande Coal and D’Prince were outstanding.

There is no ‘wow factor’ on the complete production of the album, and I direct this concern to the record label. Efforts should have been made to help Wizkid make more sustainable music than just spur of the moment songs. However, their approach may have been intentional based on their survey and target audience but Nigeria’s music is fast growing beyond that. I’m saying if I lose a copy of the album, I might not have to buy another.

In conclusion, Wizkid’s ‘SUPERSTAR’ is not a bad debut but the attraction remains the earlier promoted singles. I won’t be surprised if some fans are disappointed already but then again, some songs/albums will have to grow on some listeners.