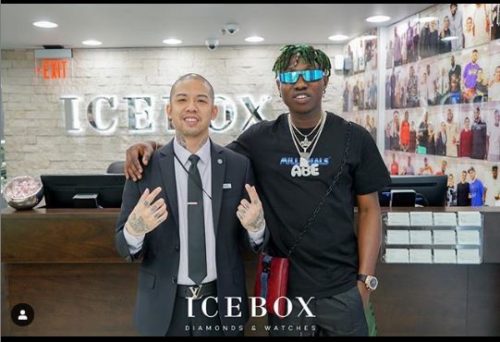 After receiving a diamond (Chain & Pendant) gift from OBO as an official member of Davido’s 3oBG, Zlatan links up with Icebox to get his ‘Zanku’ customized with Diamonds.

Zlatan Ibile the Headies Next Rated act and the pioneer of Zanku, connects with one of the biggest ‘Diamonds and Watches’ store in the world, Icebox to get his signature crested with Diamonds. The fast raising artiste who is currently running his Zanku US tour was entertained by Davido, The Adeleke’s and 30 Billion Gang yesterday at Alanta. The singer got a surprised gift from the Baddest, Davido in Atlanta, David Adeleke gave him the 3oBG pendant with a chain all covered with Diamonds by Icebox to welcome him to the family officially both Local and International.

After this gift, Zlatan steps into the Icebox store to work on his Zanku signature. After Skiibii’s recent visit for his customised Diamond pendant, Zlatan becomes the next Nigerian artiste to follows the step of Davido in patronising Icebox and rocking topnotch blings (Neck Piece).

“Zlatan Goes To Icebox To Get His “Zanku” Covered With Diamonds || Watch”, 5 out of 5 based on 6 ratings.