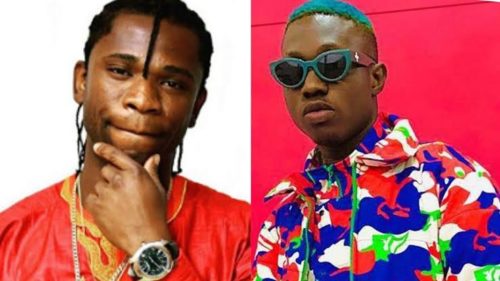 Do you all remember Zlatan some months back promised to buy Speed Darlington a new Iphone? If no! He actually did and the “Zanku” singer has fulfilled his promise, buying Speedy a brand new Iphone 11.

Zlatan and Speed Darlington met on Instagram few months back and ever since, they have been friends. They have gotten along to the extent that Zlatan even promised to jump on one of Speed Darlington’s songs.

The “Zanku” crooner finally travelled to the United States last week and since then, he’s been performing at shows back-to-back. After finally getting a break from his perfoemance, Zlatan then thought of meeting finally with Speedy but without going empty handed. He fulfilled his promise by metting with the “irregular speedo metre” and handing him a brand new Iphone 11 pro.

“Zlatan Surprises Speed Darlington With Brand New Iphone 11 Pro In The US || Watch Video”, 5 out of 5 based on 5 ratings.