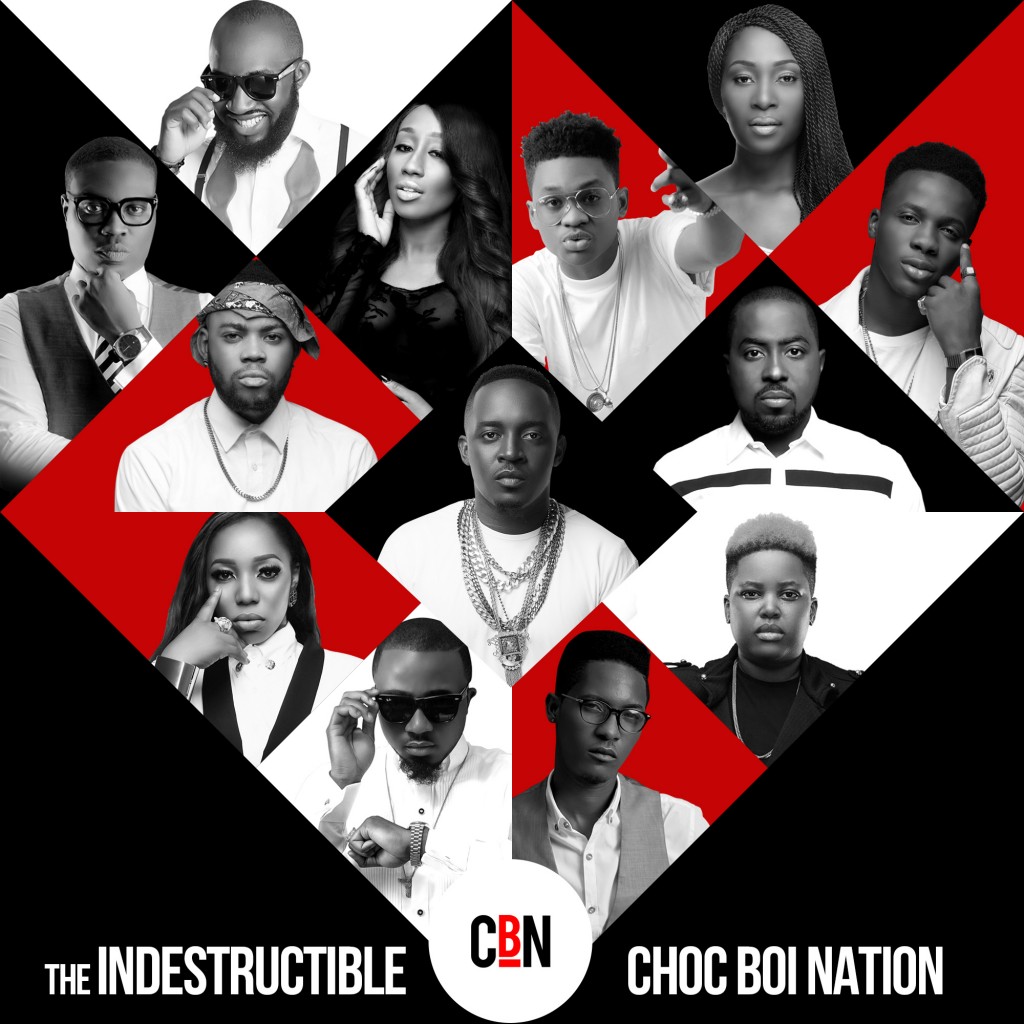 The drama that has played out at the old Chocolate City is nothing short of the dialed down tension from perhaps one of your least favourite TV series. Brymo left, then Jesse too… MI stayed hibernating even longer than a Windows NT would and Ice Prince’s better achievement would be his evolution into a college fashionista.

Welcome Choc Boi Nation. In a typical plot to a sequel, Jesse’s comeback was announced and then Audu made known his decision to step down. Choc City merged with MI’s Loopy Music pretty much revealing him as the label’s successor considering his newly found penchant in the managerial approach of things as well as his inputs in discovering fresh hard talents like Reinhard, Milli, L37 and other decent likes contributing to his label’s growth, not forgetting his flawed album success.

The only way they could have announced this new formidable and upscale force that had been birthed was obviously to release a compilation album with the overlying aim being to display their strength in numbers. And as such, one can only expect a high sense of decency from such order of musical talents on “The Indestructible“ album. Because it’s sole purpose was the announcement of a new synergy, it soft pedaled on the need to evoke factors of excitement as a whole instead leaving one or two new acts plenty grace to not only rise but shine. So did Koker and Milli. Koker’s Do Something is not exactly new material to our washed out music terrain but it exudes right as the stand out track on the album and certainly does a lot to ascending his star prowess past the light we saw him on MI’s Rich. Just like Brymo, the style of his art is the seasonal kind. It’ll be detrimental if he serves us a little too much of himself because we’re supposed to not get enough of him. If Koker keeps this up with precision, it won’t be long before he dominates the streets with owambeness. Milli on the other hand is quite the classic act, steady giving an alternate approach to the singer-rapper art especially when you consider how well honed he is in the two. Thank the stars, both Koker and Milli gave us the groovy locally-infused Heart Felt produced by Reinhard.

You thought MI and Jesse had some chemistry? Well, the spotlight seems to have beamed on Jesse and Ice Prince. Summertime and Suite 99 saw Ice brewing out the finest stuff from his trial attempts at rap. Perhaps, we can tie it to the fact that Jesse was in the booth. There’s an obvious inevitable fact that Ice loves to sing, even though he’ll never be a Nosa at it, presents one of the reasons why I’ll call him a rapper with plenty hesitation. Now Reinhard. Young and witty with enhanced auditory senses, he’s the most exceptional addition to CBN. This next-to-be-famed producer had been kicking it hard since joining Loopy Music and co-producing on MI’s album up to having production credit for as much as 8 tracks on #TICBN. If you enjoyed Dice Ailes on Fantasy and Telephone, then you should make a brief stop on Oh No No. I love this kid! He revamped his afro dispensation and tasked himself with delivering heavily compulsive lines on some Tunday-styled bars. Who knew this kid had it in him? He might be on his way to bringing something new to the table should he not bow to the pressures of the demanding industry born out of stereotypes.

Teck-Zilla torched on one of the smoothest beats for Pryse. Rather than live up to the expectation of a Trina and Patra mix, she drowned it all with sparse weak lines and a not-so-memorable delivery. Someone else has gotta give Ricochet the desired justice. Ruby and Kimani redeemed the femme fatale image. While Vicky was belting out her confidence on the R&B flava, Loving You; Ruby was showing off octave after octave on No More. Very awesome stuff! I’m not feeling the need to ballyhoo Jesse Jagz. While some choose to marvel at his intransigence, I’ll say he has only excelled impeccably in well-doing of what is right. Jesse appears to be fine with the reigns to which he’s ballooned and doesn’t look like he’s be stretching past it. Still, it’s difficult faulting him… as in, he’s that good! And for all those who wanted to know the digs about his exit (and return), Restoration (which I think should be a rapper’s standard) wound down the album to a vanquishing close.
Then MI. This guy has certainly maxed out on all the show tricks in his magic hat. Having bared himself on a slate for us to see in all the elements of his creative being, it’s only normal that he’d be resting on his oars now. As against owning the boss status, he’s settled for second-in-command. Mainland Bridge is one of those tracks that leaves you wondering what’s goin’ on.

#TICBN is one word – decent, which is a simply a by-product of the artistry in the caliber of musicians made to feature on the album. It’s also an effort made possible by the acuity and skill of the production team who successfully fashioned an order of new school hip-hop beats and pop inspired sounds bridged with a local fusion to meet an appealing audience. The entire body of work is hardly boundary defying as it doesn’t alter practicing trends of the industry neither does it raise the stakes or challenge the status quo. As a people, they are sure as hell indestructible on basis of appearance and presentation. Without a doubt, CBN is a roll-call of some of the industry’s best and finest budding talents. However, being MI, Jesse, Ice or Ms Kimani does not provide sufficient empirical evidence to support motions that Koker, Milli and Dice will attain same. This is afterall Nigerian where labels are still plagued with issues regarding proper talent scouting and eventually, effective level management. Thus, for Choc Boi Nation who have risen to the feat of becoming the biggest (or largest isit?) music label with much as 13 acts to cater for, we can only sit back, fold our hands in akimbo and watch with earnest hopes that they haven’t bitten way more than they can chew.