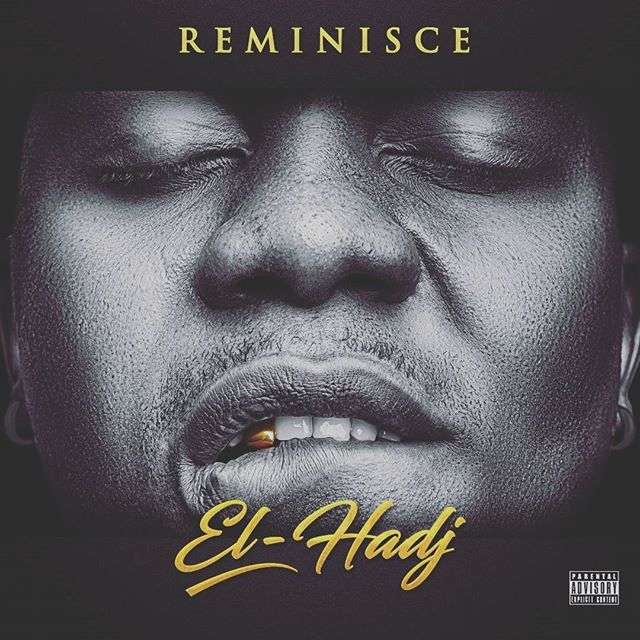 For eight solid years, he not only remained in the consciousness of mainstream rap music, churning out hits after hits, he showed off his versatility and refined artistic inspirations to cement this position. Alaga, as he is fondly called, has yet again, proved why he is regarded as an all round entertainer with this intriguing, sensational and brilliant body of work called, ‘El Hadj.’

Hip Hop is a beautiful way of artistically expressing one’s self, and this Reminisce, held on to as he conveniently delivered this truth via the different genre employed in the making of this album, and like the smart-ass that he is, he relied heavily on a subject he is all too familiar with, marathon bedroom antics with women, his love for designer clothings and of course his debatable stance as the leader of new school rap.Yes, this new album still consist of his signature vulgar lyrics, he however made it a distasteful pleasure to everyone who dared/dares to listen to his genius on most of the tracks.

EL-Hadj, which is a name given to a person who has completed his hajj to Mecca, couldn’t be more perfect for the album title , as he ensured that he alone did not successfully attain this new phase in his life, he made sure every featured artiste except one of course also reached their own Mecca by playing to his and their strength. This alone makes El- Hadj,  a must have/listen for all.

Nuff said, let’s dive into the review track by track.

WHERE I COME FROM

Armed with a valiant tone, deep vocals and just about the perfect beat for such song, Reminisce, portrayed the unsettling lives on the street bringing forth an air of menace and  fear as he vividly details the atmospheric state the hood is in particularly his, this he achieved with wordplay.

There is absolutely nothing like a Reminisce song not having some form of raunchy/vulgar lyrics and this was again portrayed in Ibadi. Again boasting on his sexual prowess, Reminisce, with a somewhat coarse vocals, came through on this Sossick produced track. Not one to mince words when it comes to sexual activities, Reminisce brought forth ‘raw’ aggression, on how proficient he is in bedroom games.

Another explicit number on his prowess. Beautiful beats…particularly love the dude on the chorus…distastefully beautiful.

IF E NO BE GOD FT MR EAZI

Mr Eazi’s uniqueness did not for a second go unnoticed on this track. His created the perfect hook for Alaga to unleash his venom, effortlessly showing a bit of his vulnerability and being grateful

ONE FOR THE ROAD FT SOLIDSTAR

His attempt at singing, just proved my worst fears…..Davido is a great vocalist, Olamide, is an intellectual songwriter and Viktoh will definitely blow in two months. Not a shabby track though.

Love love piano’s and the use of it on this track which made my heart swell with pride as he sang about his struggles, is indescribable.

This less than two minutes Apala magic alone, will bring even more fans for not just Terry, but El-Hadj himself. One word, sensational.

The use of talking drums and percussion in these tracks, makes it a perfect number for any owambe gathering, Infact any DJ who plays this song as such gatherings might become highly sort after before such party.

Immediately it started playing, I was transported back to 9ice’s hay days and for a minute, I found myself doing what I would not do that time of the day, smile…good one from both of them.

Tuface’s memorable and unique vocals came to the fore on this track and yes, Daddy brought his A game. Reminisce and Tuface, in Falz’s voice, wondervul stuv.

If a track like this is suddenly found missing on Reminisce’s body of work, we might all begin to think he has lost his sauce, because lets face it, vulgarism/raunchiness is his forte. Beautiful bass drum sounds as well.

As usual Oladips, did not disappoint. One of the young rap acts we should/must all look out for. . However, I pulled out two things from Reminisce’s part, his need to over stretch the  truth about what he has in his wallets and of course his need to shove his hyper-masculinity in our faces.

Rap and RNB came together on this album and am certain fans couldn’t e more grateful for this piece. Sojay, beautiful vocals, brought life to a track that would have easily passed for a Skiibi.

Happens to be my favourite on the album due to the monstrous beats and Oladips’s lyrics. It took to me days to write this review all because of Seriki and am yet to understand what he was doing/did on the track or anywhere else, Ice Prince’s business on being on any song yet and Reminisce’s decision to include the two on such wonderful track. In my opinion, Oladips and maybe Wale turner could have turned this mother out.

All in all, one can not shy from the fact that Reminisce did show he truly deserved his name. He did graciously allow us an inept view into the musical prowess of almost all the featured acts on this project, simultaneously reminding us our reasons for loving a few others. He just placed the bar a foot higher and am more than interested to see who tops this genius.