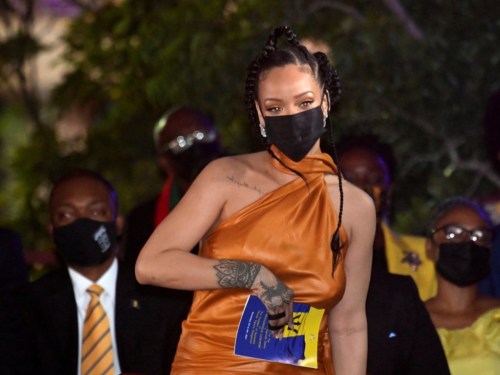 Rihanna has been named the 11th National Hero of Barbados. She is the second woman to ever receive the honor and her title will now be:

Prime Minister Mia Mottley announced that the 33-year-old would be conferred with the honor of National Hero of Barbados to cheers. Rihanna was called up before the crowds to be congratulated by Mottley.

May you continue to shine like a diamond and bring honor to your nation by your works, by your actions, Prime Minister Mottley told Rihanna, a reference to her 2012 chart-topping single Diamonds.

Prime Minister Mia Mottley not only met with the Prince of Wales during the day but during a ceremony, she recognized Rihanna as the country’s National Hero of Barbados.

The Fenty mogul was in attendance and was also in Barbados to see the swearing-in of the country’s new president, Governor-General Dame Sandra Mason. Now that the Queen is no longer the head of state, Barbados will see new changes implemented in the years to come.