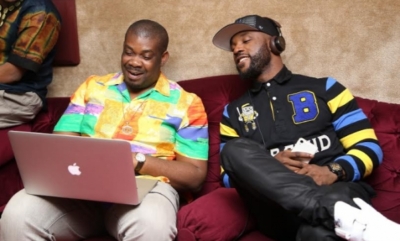 Speaking on the deal via a statement, the ace producer attributed it to Iyanya’s “versatility” saying:

“From the first time I stepped into the studio with him, there was an instant chemistry and energy. He is an amazing talent and he has great musical versatility.

“This is an exciting time for us and our fans have a lot of great music to look forward to. Iyanya brings his own unique style and sound to the Mavin Records family.”

The new deal came as a result of Iyanya, signing a management deal with Temple Management, a creative talent agency, whose sole aim is to aid the singer in launching a new phase in his career.

“I am at a decision-making curve in my music career where I have to make the right professional and creative decisions. At this point, I realised the need to put in solid structures in place to move to the next level of my career.

“I think I have found that professional and creative backbone in Mavin Records.”