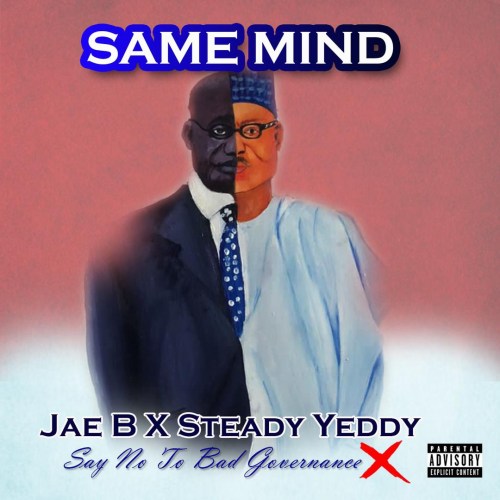 Just like every other well-meaning Nigerian anchoring for lasting peace, economic growth, development and safety, Nigerian singer, Otoide Johnson best known as Jae B rejuvenates the voice of the people as he pushes to mutilate the unacceptable ignorance the government have shown to it’s citizens without minding the discomfort and sadness imposed.

As Nigerians embodied with the responsibility of seeking for a better nation, Jae B creates a telling single teaming up with his Nigeria counterpart Abbah Edward Wealth, known by his stage name, Steady Yeddy to elaborate and drop key points which are undoubtedly true concerning the state of the nation. As the song is titled “Same Mind,” and the two artists are speaking with the same mind as most Nigerians clamoring for better governance.

The song which speaks about the tragedy people have been facing is a perfect song for the month of October to aid in the memorial of the Lekki Toll Gate massacre that occurred back in October, 20th 2020 which led to the lost of many lives leaving well-meaning Nigerians in untold shock.

With so many issues taking center stage in the country, Jae B and Steady Yeddy’s new collaboration is sure to be an anthem to gear citizens into the forthcoming general election coming up next year. The single doesn’t only talks about the state of the nation, it also sends a strong message to Nigerians who are expected to focus on a better voting decision.

The song was produced by BeatzDakay. Lyrics and entire song structure was done by Jae B and Steady Yeddy. The song is out and available on all major music platforms and blogs.

Listen and drop a comment. Don’t forget to get your PVC and vote wisely!