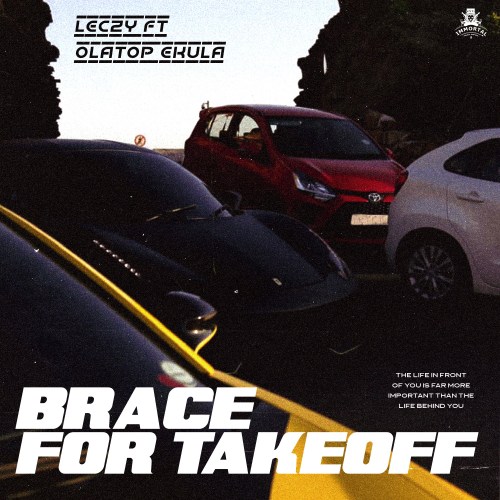 Talented pop star, Leczy is not resting his oars to attain a place of revere in the music scenes as he premieres yet another brand-new single today, which he has christened “Brace For Takeoff” featuring Olatop Ekula on vocal assist.

“Brace For Takeoff” is following closely from Leczy’s most recent release ‘Hustle’ which featured self-acclaimed world president and street pop sensation, Zlatan Ibile. The single enjoyed appreciable reception and opened Leczy up to a whole new opportunity platter such as expanding his fan base, and as well giving him the desired credibility from having a rated superstar grace his record.

Leczy is now riding that advantage and has seized the moment to deliver this fresh inspirational tune that will be sure to ignite the zeal of every young and aspiring hustler who’s dared to dream and hopes to attain greatness in their pursuit.

The new single “Brace For Takeoff” is filled with motivational lyrics that are sung in typical street lingo – for easy and quick resonation with the grassroot community – and embellished in his native Yoruba dialect, giving the musical its cultural edge. The song’s production is modest with a sparse use of instrumentation that allows for Leczy to really shine as his versatility in singing and writing comes together. There is also a choral break from the background vocals that elevates the entire mood of the song into a deeply spiritual moment thereby creating a vibe which listeners will absolutely love and continue to reminisce on.

Just as Leczy has been fueled by his passion, he is using his creative outlet as a tool to trigger the drive of others to success. This new release is however one of many ways he is pushing this narrative while his idea of legacy gradually shapes into form, one music release after another.

Listen to “Brace For Takeoff” and be inspired!