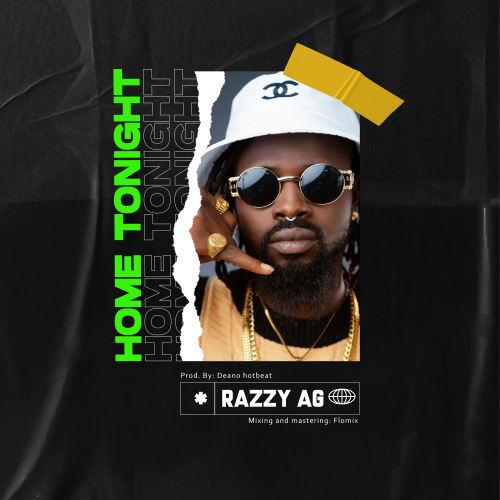 No sooner had the Spartaz famous and multidimensional singer and rapper, Razzy AG dropped a scintillating official video of his previously released song “Mandela” on his YouTube channel and other visual media platforms, than he premiered a soul warming solo titled “Home Tonight“.

“Home Tonight” is a song that captures the arduous journey of a hustler who has traded his comfort zone to face the reality and grinding non stop to make both ends meet, bearing in mind the strives, the sacrifices and the pains.

“I’m a big time hustler, I’ve been working in the street, all day, all night, I’ve been gone for so long, but I’m coming home tonight”.

An Afro beat singer, Razzy AG who hails from Ikere-Ekiti and hitting the street of Lagos with his Melodies has expressed his desires to return home since home is the happiest place in the world.

“Home Tonight” is a production of the In-House music producer, Deano HotBeatz and notably sound guru, Uddy String and it was mixed and mastered by Flo Mix. It is now available for streams and downloads on all media platforms.