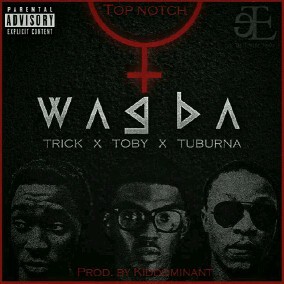 “Topnotch’s Trick,Toby and Tuburna team up with talented producer Kiddominant on this club banger.Topnotch started this year on a good note by headlining their own show tagged “Topnotch Live” they’ve being consistent over the last couple of months building their fanbase and releasing good music.

Trick,an outstanding rapper recently released “4:20 in Gidi” a song which received great reviews is currently working on his second mixtape “wayward lifestyle 2” and will feature production from Ymcmb/Taylor Gang affiliate producer Jstaffz. Toby the amazing vocalist released his debut song “speechless” to rave reviews and is working on his next couple of singles.While Dapo Tuburna the unique entertainer  was featured in the honorary documentary for afrobeat legend Femi Kuti and is gearing up for the release of his mixtape O.O.D this summer.Wagba is definitely a club banger that’ll keep you dancing”