The Wait Is Over: Headies 2011 Holds In Lagos This October 22

by Tyler
in News, Songs
0 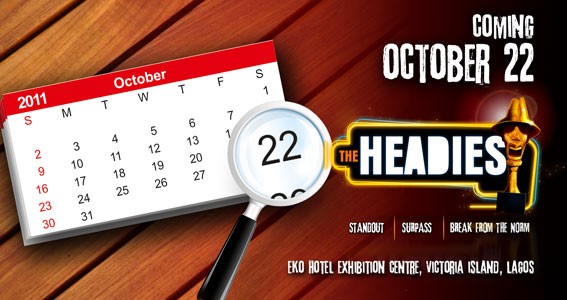 After what seemed like an endless wait, the venue and date for The Headies (Hip Hop World Awards) has finally been announced!

The urban music awards aimed at rewarding musical excellence and outstanding creativity will hold at the New Expo Hall of Eko Hotel and Suites, Lagos on Saturday, October 22, 2011 focusing the spotlight on Nigeria’s most outstanding musicians, from the heart of the country’s most vibrant city- Lagos.

To be hosted by Veteran producer and rapper Eldee, and talented actress Rita Dominic, The Headies 2011 will not only focus on rewarding talents, but will showcase spectacular performances from the country’s finest artistes.

Encouraging Nigerian musicians to “Standout, Surpass, break from the norm, organizers have promised that this year’s awards will yet again be one that the music industry will not forget in a hurry

“We took all this time to come up with concepts that will surpass the previous editions; we are glad to raise the standard again, far above what we have set over the years. This year, a lot of obvious changes will be seen, I can assure you of this” Ayo Animashaun who founded the awards in 2006 says

The awards ceremony known for its innovative and trailblazing concepts started in 2006, and fast became one of the top events in Nigeria’s annual music calendar. Organizers have single-handedly revolutionized the approach and manner; awards are organized and structured in the country.

The awards celebrate contemporary genres and personalities loved by the youths and young adults all over the country including Rap, R&B, pop and other genres.

The first three editions of Hip Hop World Awards were held in Lagos, Nigeria while 2009 saw the awards move to Abuja, Nigeria. In 2010, the awards held at the EXPO hall, Eko Hotel, the same venue that will host the 2011 edition come October 22, 2011.

Performers for this year are to be announced next week.