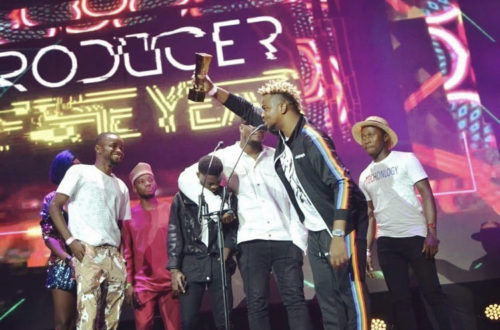 Nigerian music producer; REXXIE has just been crowned  “African Producer of the year” at the SoundCity MVP Awards in Lagos, Nigeria.

Rexxie was quite overwhelmed about this victory and he had this to say on stage when he walked up to pick the award, “I want to say a big thank you to everyone, I wasn’t expecting this but God bless everybody, God bless my team, and my family!”

This was Rexxie’s first major award nomination and it couldn’t have ended better for the prolific producer as he won the prestigious award at his first attempt.

The producer has already kick-started the year 2020 with some amazing collaborations in the works with Images of a hit music session with Tiwa Savage and Naira Marley surfacing on the internet some days back.

We can only hope for even more hits from the brain behind some of Nigeria’s biggest hits of 2019. The likes “Soapy” by Naira Marley, “Zanku” by Zlatan, DMW’s “Bum Bum” and a whole lot more.

Music producer Rexxie has received his Grammy certificate for his contribution on the Grammy Award winning album by Burna Boy,...

Award winning Nigerian Producer, Rexxie has finally unveiled the featured artistes on his forthcoming album. The certified hit maker who...

APPLE MUSIC'S AFRICA NOW RADIO WITH CUPPY THIS SUNDAY WITH REXXIE This Week's Episode Features a Conversation With Rexxie, the...