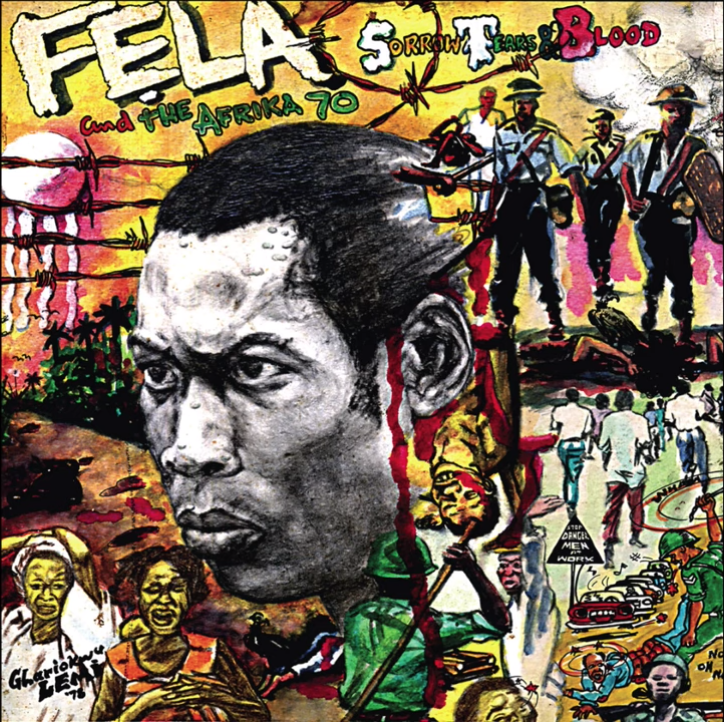 It’s one week after the Lekki Massacre (20-210-20, the killings of peaceful Nigerian Youths/Protesters at the Lekki Toll Gate) and to burn our candles for the falling heroes, patriotic Nigerians we brought forth this Fela masterpiece – ‘Sorrow Tears and Blood‘ which contains powerful message about the sorrowful incident.

Often assumed to be inspired by the February 1977 army attack on Kalakuta Republic, according to sleeve designer Ghariokwu Lemi, “SorrowTearsAndBlood” was written in response to the South African regime’s crushing of the Soweto uprising in June 1976, which Lemi and Fela had watched unfold on television.

The album was among the first of those Fela released following the destruction of Kalakuta Republic. An early sleeve design used a photograph showing Fela onstage in the aftermath of the outrage, his left leg still in plaster. He dedicated the album “to the memory of those who were beaten, raped, tortured or injured” during the Kalakuta attack. The police and army invariably leave behind them “sorrow, tears and blood,” Fela sings, and the backing vocalists respond, “dem regular trademark.” Decca refused to release the album, fearing government reprisals. Fela responded by setting up Kalakuta Records and making the disc the label’s debut release.

Listen to the short Edited “SorrowTearsAndBlood” record below as we continue to fight for Liberty and a New Nigeria.