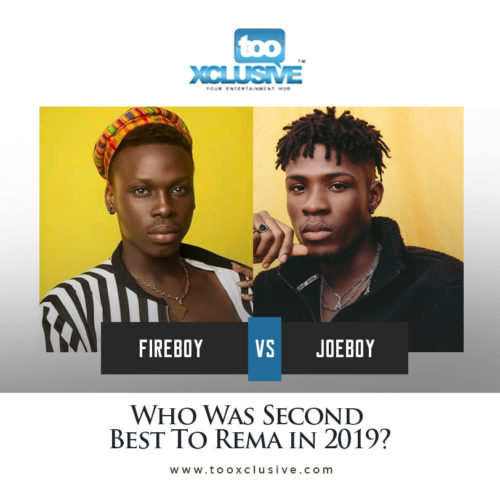 Year in year out the Nigerian music industry use to witness & welcome new artistes with good potentials and quality materials. These newbies are seen as the next generation, the next rated artistes to watch out for and huge forces who are ready to take over the baton from the top leading artistes in the industry.

2019 had its on share of next rated artistes, new acts; Rema, Fireboy and Joeboy were introduced by different record label into the music industry and they all stormed the year with their various talents and sound. At the long run Mavin’s new kid, Rema was seen as a major and crowned the Biggest next rated artiste by many. Thereby leaving Fireboy and Joeboy on same page.

Now this article is centred on these two talented acts, Fireboy and Joeboy. We want to go through their 2019 report (performance) & output (Songs/Ep/Album) with music fans and know who to rank Second next to Rema, then place the other third best.

FIREBOY
The YBNL new act, started 2019 with the hit song ‘Jealous‘, follows it up with ‘What If I Say‘ and then ‘King‘. Later in the year (in December) he welcomed his debut album with the single ‘Party Scatter‘. This debut album is a 13 stellar track project titled “Laughter, Tears and Goosebumps” with no guest appearance. Different tracks from the album (Like; ‘Need You‘, ‘Vibration‘, ‘Gbas Gbos’…) are already popping up this new year 2020. This a sign of bigger things to watch out for this 2020.

JOEBOY
The Mr Eazi’s protege under the emPawa establishment broke into the music in 2019 with his debut hit single ‘Baby‘ which is still buzzing and gaining massive streams presently. Joeboy didn’t relent he followed up with another hit song titled “Beginning“, this song got him more fame, fan base and made him a bigger young star. Not stopping there he joined forces with the Mayor of Lagos, Mayorkun and both recorded “Don’t Call Me Back“, a song most people still can’t get over till now. To wrap it all up at the year end (2019) he dropped a body of work titled ‘Love & Light (EP)‘, a 5 track project that tells a story about young lovers. His recent popping song ‘All For You‘ came from the EP.

This a close vibe and tight one but we still need a distinct. Now with the aforementioned report of both talented acts couple with your own facts and thoughts, Between Fireboy and Joeboy Who Should Be Ranked First? or Who was Second Best (Next) to Rema in 2019?