When Gbas is given, Gbos is expected.

This appears to be the case with Joeboy and A Twitter user who implied that the singer is broke. Recall that Joeboy and Asa have been trending following the 300 Million Naira lawsuit Asa filed against Joeboy.

Asa claims Joeboy used her composition for his new song- ‘Contour‘. She wants Joeboy to take the song off streaming platforms, pay 300 Million Naira for damages, and tended a public apology. Joeboy made it known that he will not pay her a dime and she is free to do her worst.

Nigerians on Twitter surprisingly took Joeboy’s side and advised him not to pay her the money. Many believe Asa is taking Revenge on Joeboy for what Tempoe did to her. However, a Twitter user, Silvia did not feel the same way.

She said Joeboy does not have N50 Million in his account, not to mention the 300 million Naira Asa is demanding. This didn’t sit well with Joeboy who hopped on Twitter to warn the lady to mind her business. In his words; “You go just open your mouth waaaaaa” 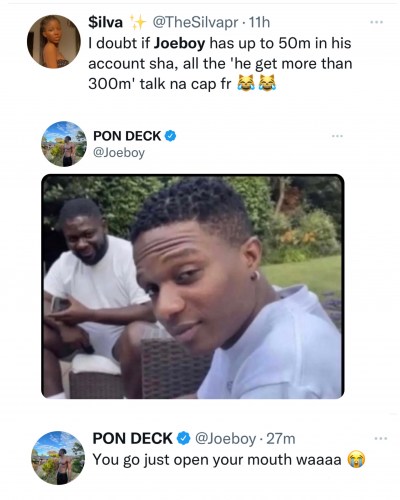 Joeboy is out here with a message for his colleagues in the industry. Nigerian singer and songwriter, Joseph Akinwale Akinfenwa-Donus,...

The Moment Joeboy Met His Twin Brother While On Tour In U.S || Watch Video!

Joeboy has put internet users in a topsy turvy situation. The singer posted a video of him and his twin...

Joeboy is over the moon at the moment. The Beginning singer is excited after his label Boss and colleague surprised...