Davido has recorded another breaking achievement with the success of his recently concluded 30 Billion concert. The concert which was held at Eko Hotel & Suites in Lagos on December 27, 2017; has been highlighted as the first Nigerian concert to trend worldwide.

The hashtag #30BillionConcert trended across different continents, including the UK and in the US. The event has gotten a commendable number of positive reviews. The 30 Billion Concert would be remembered as the occasion that caused the reunion of the Mo’hits group and the solidification of the reconciliation between two of Africa’s finest artistes; Wizkid and Davido.

The fact that the concert trended in different countries and across continents, proves that Davido’s international reputation is on a surge and his fan base is expanding to accommodate people in the international community. 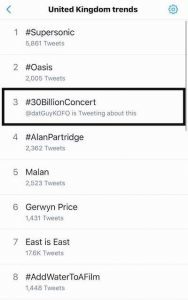