New Sony Music act, Davido, has put all doubts to rest for now, as he took to twitter to announce his first show under the label.

The singer, who until yesterday, had been slammed by several people following his declaration of being the first African artist on Sony Music Global list, tweeted how he felt and also confirmed that he had finally booked his first concert in Amsterdam, since being signed to the label. 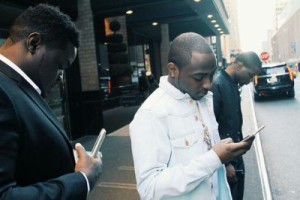 Pple hide under all these accounts to say shit they can’t say in real life and u feel good about ya self ??

Is social media really social media anymore??? Or a place for gossip and to bash ourselves or release false or altercated news …

IM getting too much money to be worried about social media !! SHIT AINT REAL ON HERE !! ?? pic.twitter.com/tV137cSvI5

JUST GOT BOOKED FOR MY 1st CONCERT IN AMSTERDAM GONNA BE MASSIVE!! CANT WAIT ?????

Drake Apologized To Me Personally, So Falz Should Do Same – Vic O

Drake Apologized To Me Personally, So Falz Should Do Same - Vic O