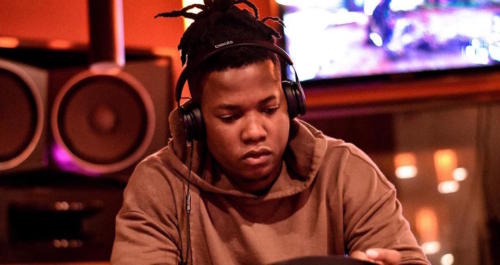 Nigerian music producer; Kiddominant, has just achieved a magnificent feat as he’s made it to Beyonce’s forthcoming album.

The producer who is arguably the biggest afrobeats producer at the moment is seen sitting as a producer on the number 4 track titled, “Nefertiti.” What even makes this achievement one that should be celebrated is that the song has 2 of the biggest artistes ever in the history of American pop in Beyonce and Rihanna. Yes! Kiddominant has produced a song in which Beyonce features Rihanna!

Kiddominant is Nigerian superstar singer; Davido’s producer and he is currently working on Davido’s forthcoming sophomore album. Davido announced him some weeks ago as the executive producer of the album.

Kiddominant just recently revealed to the public that he’s the first afrobeats producer to have two records go platinum. The first is Davido’s 2017 hit single; “Fall” and second is “Fela In Versace,” his song with South African hip-hop act; AKA.

Omg @kiddominant !! Made it on Beyoncé Album! Jesus!!

Congratulations to you Kiddo!