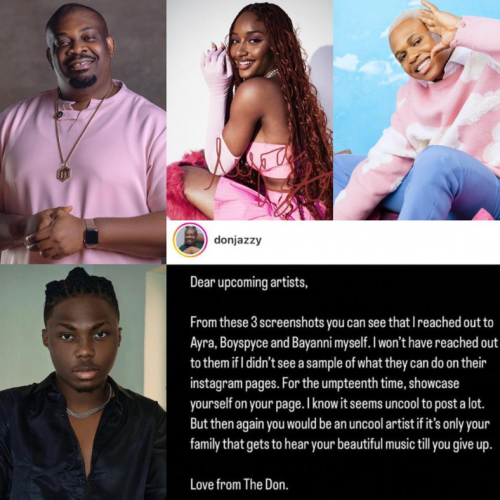 Don Jazzy has once again given up and coming artist the secret to spotlight, limelight and stardom.

He took to his social media account to address it after Nigerians accused him of collecting bribes to sign new artists. This gist came to be after Mavin Records activated Bayanni less than 4 months after Don Jazzy unveiled Boy spyce to the world.

Don Jazzy revealed that he didn’t collect anything from anyone and he is always the first to reach out to the artists he signed . He shared screenshots of how he reached out to Ayra Starr, Boy Spyce and Bayanni first on Instagram because he liked the works on their pages.

He advised Upcoming artists to advertise themselves via their social media accounts so interested label records can see them and explore their talents.

[Lyric] BNXN – In My Mind LYRICS

Mavin boss and Ace producer, Don Jazzy has finally announced the release date for the Mavin all star album. For...

Finally, Don Jazzy has a response for us. Ace Nigerian producer, Micheal Collins Ajereh, widely known as Don Jazzy has...

Music Producers, Don Jazzy and D’Prince has announced the death of their mother. In a post shared via Don Jazzy’s...