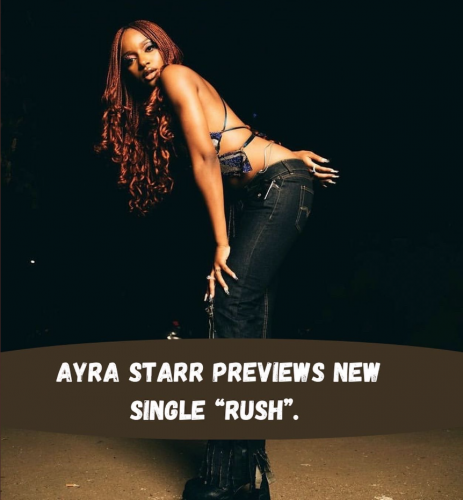 Ayra Starr is set to kick off with her first single of the year titled “Rush”, which will be out this Friday – 16/09.

Mavin Princess, Ayra Starr is ready to drop a new song, but first she would like to know what her fans think. She hopped on Instagram to share a listening of her first single, RUSH.

This new announcement and snippet is coming weeks after she and Tems caused commotion on Twitter with the tweet- ‘E dey rush‘. And also after Ayra Starr previewed the Remix of her smash hit song, Bloody Samaritan with Jamaican singer, Koffee At The 2022 Coachella and a song titled, PEACE. (Listen Here!)

Ayra Starr definitely knows how to tension Netizens, but is she over doing it now?? The Mavin artiste is trending...

Wizkid and Ayra Starr gave a stellar show to their fans as they officially perform "2 Sugar" on stage. The...

“Tems And Ayra Starr Are On The Same Level” – Daniel Regha