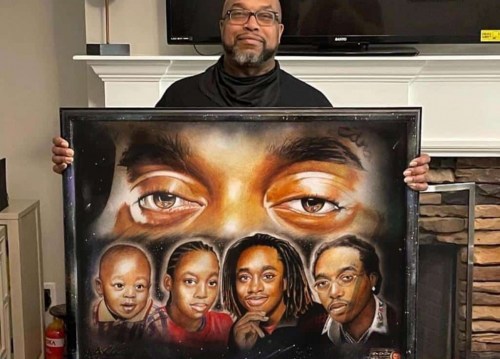 The Migos rapper was tragically killed outside of a bowling alley, in Houston.

According to reports, Quavo had gotten into an argument with a group of men. Suddenly, shots were fired and Takeoff ended up being hit in the torso and head.

On the 11th of November, Takeoff’s friends and family gathered for his memorial. The likes of Cardi B, Offset, Quavo, Drake, and a host of other celebrities were spotted at Atlanta’s State Farm Arena.

Yesterday, the 19th of November, Ron Da Don gifted Takeoff’s father a thoughtful gift – a portrait of his son.

JUST IN: Takeoff Reportedly Shot And Killed In Houston