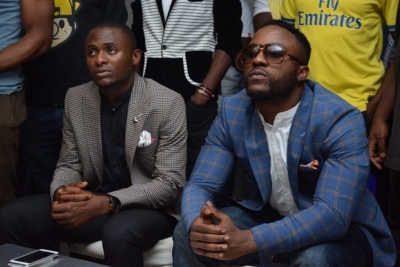 Just yesterday, Ubi Franklin responded to Iyanya’s claims of betrayal while he was at TripleMG.

Iyanya said in an interview on The Juice that Ubi Franklin removed his name as a co-owner of TripleMG, thereby registering the company only in his name without telling him until he discovered all by himself.

After Iyanya’s interview, Ubi went on Instagram to release some picture documents that he wishes would downplay Iyanya’s claims and project them to the world as lies. On seeing these pictures, Iyanya did an interview with CoolFM’s Daddy Freeze where he revealed all that happened between himself and Ubi, how Ubi betrayed him by removing his name as the company’s co-owner and replacing it with his brothers’ names, how he gave him just #145,000 from Tekno’s career, how he diverted the company’s money into his own personal account and a lot of other things.

Iyanya who was quite emotional in the interview revealed the things he passed through in the hands of Ubi, he revealed that the pictures Ubi posted on Instagram are documents of 2016 when he forced him to settle, he is now demanding that he releases that of 2012 when the company was formed if truly he is innocent.

He also said Ubi Franklin almost ruined his life and that he’s still ruining some people’s lives even till now.

“You have ruined many lives. One day #Tekno will speak out,” #Iyanya tells #Ubi. ?: CoolFM/Daddyfreeze

You can watch the full video below: