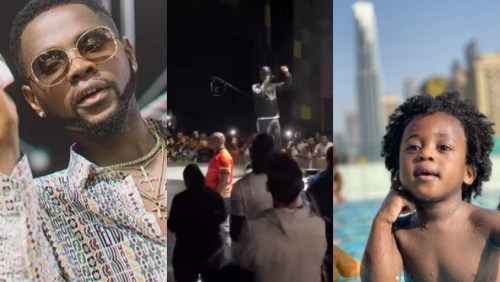 Recall that on the 31st of October, 2022, Davido lost his 1st son, Ifeanyi Adeleke. Ifeanyi was said to have drowned in his dad’s Banana Island mansion swimming pool.

Unfortunately, by the time he was discovered, he was already at the bottom of the pool and was pronounced: “dead on arrival” by the doctor.

Kizz Daniel who has been on a tour to several countries paused one of his shows to pay his last respect to Ifeanyi Adeleke.

He kindly asked the audience to offer a minute of silence for the deceased.

The parents of the deceased are yet to break their silence, however, pastor Tobi Adegboyega gave an update about their well-being.

As stated by him via his official Instagram page, “they are both getting stronger”.

“Why I Said ‘I Will Be Rich Till I Die’..” – Kizz Daniel Reveals What Inspired His Next Single, RTID