Nigerian veteran singer, Eldee The Don has praised Fireboy for delivering such a magnificent body of work as his debut album.

Fireboy’s album “Laughter, Tears, and Goosebumps” continues to slap hard since its release in November. The 13 track album which has been named one of the best albums ever released, has wormed its way into the hearts of millions of fans and veteran singer, Eldee The Don happens to be the latest singer to be wowed by the young singer’s body of work.

The singer took to his Instagram page to commend the YBNL act for his efforts on his debut album. According to him, he had to appreciate the album again and went on to call it a very rare body of work that even the global greats have never released. He captioned the photo: “I just want to take a moment to appreciate this album once again. Very rare to find such a solid body of work these days, not even from the global greats. Well done.” 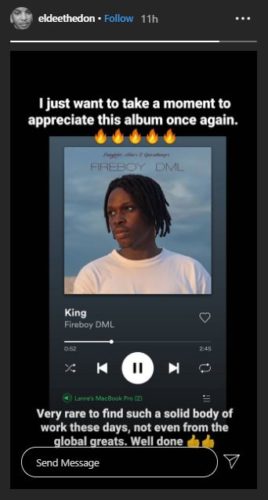