Rema’s “Lady” VS Fireboy’s “Scatter” – Which Is Your Favourite Party Jam? 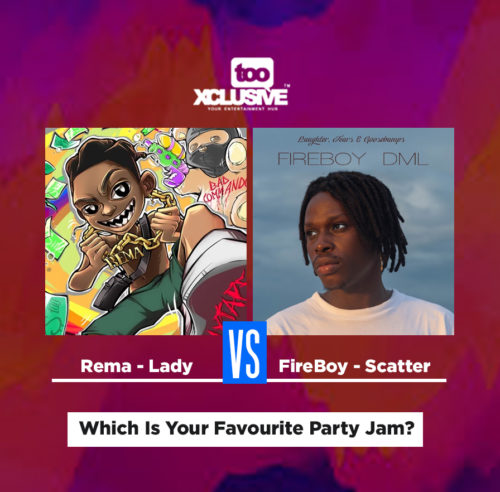 Rema and Fireboy are looking like the duo that would sit on the rivalry seat of Davido & Wizkid once the reign of those two folds up.

The two young music sensations are being directly compared at the moment in the areas of talent and their influence on the music industry within their short existence. The two by many are already seen as rivals and ones that would look to push each other in the music industry for a long time like Davido and Wizkid have done.

Moving to the main objective of this publication, Rema few weeks ago dropped his 3rd music E.P which houses a particular banging record; “Lady.” This record has seen many adopt it as their favourite as they believe its a massive party jam. Meanwhile, Fireboy who recently dropped his debut album included on the project a banging record also which is titled “Scatter.” This song is being touted as the next hottest party jam and one that is better than Rema’s lady.

Though both are great party jams, but since there is an issue about which the better one is, we would like to know which your favoruite party jam is.

Rema’s “Lady” VS Fireboy’s “Scatter” – Which Is Your Favourite Party Jam?

Nifemi is a graduate of the University of Lagos. He's a unique user of the pen when it comes to the expression of whatever. He is editor-in-chief of the organization and also a writer of news, articles, editorials and a lot more to help expand the level of knowledge of the readers and simultaneously have them entertained. A lover of music and football is who he is and a Man Utd die-hard.
Submit your comment
11 total pingbacks on this post
VIDEO OF THE WEEK