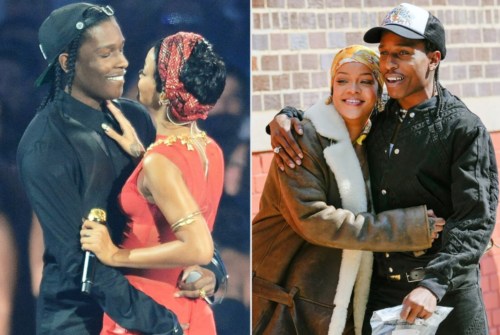 From being declared as a natural Hero in Barbados, to now being reportedly pregnant with her 1st child, Rihanna must be living the life.

The singer and fashion mogul, who will be turning 34 next February was spotted at the Barbados event with her visible baby bump.

MediaTakeOut is the only media organization claiming she’s pregnant, so we don’t know for sure if this info is correct.

Back in September, there were rumors of Rihanna being pregnant by her boyfriend, A$Ap Rocky.

The rumors first began when fans saw photos from Rihanna’s recent cover shoot for Dazed magazine. On the cover of the magazine, the Fenty Beauty founder is seen facing her body away from the camera, sparking the idea that she’s hiding a baby bump.

In another shot, Riri is seen wearing long, blond locs that are draped all across her body as she lay on the floor. The angle of her stomach along with the hair covering it are the shot that received the most “she’s pregnant” comments, with fans perceiving anything besides washboard abs to be a baby bump.