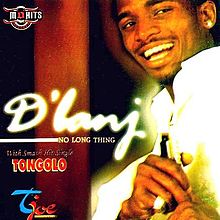 It’s been 12 years since the musical sensei, D’Banj dished out the evergreen record “Mobolowowon” to Nigerian music lovers ushering in a new dawn in the music industry.

The record “Mobolowowon” was one of the lead singles off D’Banj’s debut album “No Long Thing” which was released by Mo’Hits Records in 2005 with the entire production scored by Don Jazzy.

The music video for “Mobolowowon” was directed by DJ Tee.

If you do not know this record, you are on a Long Thing!