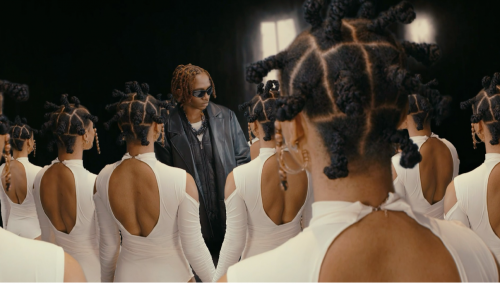 19 OCTOBER 2022, JOHANNESBURG: Layzee Ella’s ‘Medusa’ featuring fellow Nigerian musician Khaid has been her biggest song to date, reaching over 905K streams across platforms since its release in July this year. A little less than three months since then, the budding superstar offers fans its visual companion piece filled with Greek symbolism but told through Layzee Ella’s gaze.

Directed by Pink of Pinkline Films, the video draws inspiration from Greece’s classical and mythological character, Medusa; visually established by molded statues with snakes for hair. It goes further to paint the picture that Layzee Ella aimed at creating with her vocals on the feel-good record.

The video opens with Layzee Ella wandering through a gallery permeated with many versions of the ‘sometimes beautiful, sometimes repulsive’ Gorgon monster Medusa, with a head of serpents for locks.

The gallery and its artifacts are intriguing and as the video progresses, it isn’t long until both Layzee Ella and Khaid discover that there is more than meets the eye in this mysterious place. The tale of Medusa is a tragic one that Layzee Ella uses to describe a past relationship.

In the song she raps, ‘Know you cause a problem when you talking / you walking / you say we been sorting it out / you f*cking my mind / wicked in your eyes / gimme many reasons not to trust you again’, revealing confidence lost in a partner.

The music video is appealing in how it merges story and performance in beautiful colors, bringing its subjects alive.

Crucial to Layzee Ella’s songwriting is her devotion to love and how her relationships, both romantic and platonic, have influenced her music. Equally essential is her exploration of sounds that are true to her curious spirit. The tail-end of October will see the Nigerian rapper, and singer-songwriter released two remixes of ‘Medusa’ with Canadian artist Ikky and UK alternative band Sleepwalkers, giving fans an opportunity to enjoy the song anew. Later still, ‘Chemical’, a fan favorite on the Feel Everything EP, will be reimagined by Latin artist Mendoza and is set for release in November.

The music video for Medusa is out, watch here: