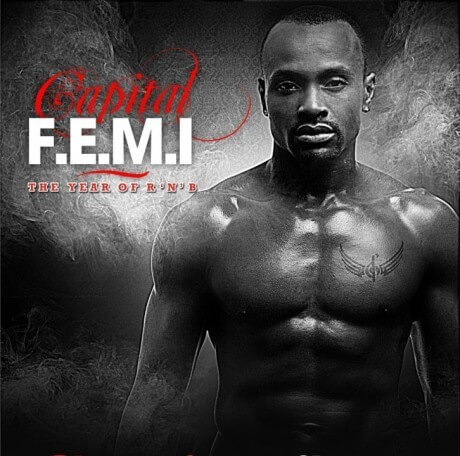 If you ever felt like listening to Nigerian R&B music that is synonymous to the authentic stuff but have being unable to quench that thirst due to the adulterated recordings our self-acclaimed R&B artistes put out as rhythm and blues. I come bearing good news as  Capital F.E.M.I has declared a New Year with the release of his debut album titled “The Year of R’n’B” which is a giant leap from the bunch of packaged market music 2012 has witnessed. The singer should author a book a title it ‘R&B for Dummies’, you think it is all exaggeration?

Capital F.EM.I reintroduces himself with ‘Capital F.EM.I’, where the singer teases memory as he sings; “I gave you Never Felt a Love, I gave you Money Money Money…” The opening tune is a pretty much a mid-tempo song about bragging rights. Adeyinka tries to please the dance crowd on the Sarz produced ‘Get Low’, drums, pianos are some of the musical instruments that come to play as the tenor keeps up delivers a fair contemporary R&B dance number. The third track is the debut single of the Kennis Music recording artiste and fan favourite ‘Baby I Got It (Money Money Money)’ which features veteran Eedris Abdulkareem and is another winner; the singer re-affirms his lover interest that money is not a problem with a rap delivery from Eedris which is the best we have seen in recent years from ‘Mr. Lecturer’.

Although it might fly with the crowd, a few might not be pleased with result when the singer teamed up with Sinzu and Jaywon. Femi seeks to win over the massive fanbase of both Jaywon and Sauce with ‘Am Just Saying’ but the instrumentation still places Femi in his comfort zone ‘R&B’ hence reducing the effect of the mega guests on the track.

Commencing from the fifth track ‘Duro Timi’, the LP dives deeper into genre it proclaims and the trend continues with ‘If’ where the performer flexes his vocal chords as he declares his love despite the hurdles. Poka Face makes a guest appearance on ‘Dail My Heart’ which precedes the daring ‘Never Felt a Love’. It is safe to call the song a classic and arguably is the best R&B number released in these shores with a stellar sexy and sultry vocals work and notes close to whistle, ‘Never Felt a Love’ is a song, lovers be it music or otherwise will drool over.

The tenth song on the LP is reminiscent of the likes of Anthony Hamilton is titled ‘Don’t Be Afraid’ followed by the popular ‘In The Name of Love’. Throwback time as ‘I Found My Wife’ rolls in; dub-step meets the local dialect ‘Yoruba’ with a break-down bridge, Capital F.E.M.I succeeds in creating a Motown-esque number that will induce your thumbs, feet and head in constant motion. Weddings bells calls in ‘Everything’ whereas Femi employs a spine-chilling falsetto which will remedy any shaky relationship in the emotional ‘Don’t Let Go’. The singer shows off his rap-singing abilities as he tells you to put his music on your ‘Playlist’ and label mate ‘Joel El’ shows support  on the J Sleek produced motivational number ‘Am a Star’. The beauty of black is preached on ‘Black & Beautiful’ and ‘OMG’ can be regarded as December and is a little lukewarm.

Many have tried and failed to create an album which can hit a pass mark for R&B but failed due to the constant pressure to push sales hence infusing elements of afro-pop, high-life, street-hop and so on and diluting the music still Mr. Femi Adeyinka has refused to comprise when it comes to good music and cheered us into a new year with a stellar 17 track LP filled with mid-tempo R&B love ballads. The vocalist might have failed to package that gritty soulful voice listeners are blessed with when privileged to catch him performing live regardless just like in China during the new year celebration; fireworks will explode while your ear drums beat praises when fed with “The Year of R’n’B”… Bonne Anne!!!

INTERVIEW: Ogagus Chats With “Capital F.E.M.I”: The Man, The Music