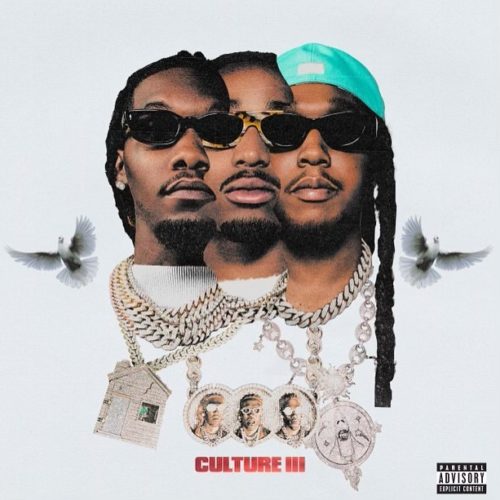 Migos comes through with the official tracklist of one of the most anticipated albums of the year, “Culture III”.

The Juicy detail was revealed via Quavo and Migos‘ official Instagram page on Tuesday, using their album artwork, which features the amazing trio, with his caption indicating that it drops on Friday, 11th of June.

You will recall that Quavo spoke with Complex about his latest collaboration with Lids – an American retailer specializing in athletic headwear, releasing an iced-out fitted cap. While the interview centered mostly around that collaboration, as well as, Quavo’s sneaker-head tendencies, the rapper also opened up about what we can expect from the album.

We’re having fun and smiling again, you know what I mean? Everybody’s been hurtin’, and going through this pandemic, and losing loved ones. I feel like this is a breakthrough.

This is the sonic boom to the new life and new world that we live in. We’ve been going through this pandemic for like a year and a half.

So, we’re coming back with Culture 3. We haven’t dropped any music in three years. The year that we was going to drop, the pandemic hit. So I just feel like it’s a breath of fresh air.

We got some good guys on there. We got our good friends on there. It’s going to be the greatest album of the year. We put our blood, sweat, and tears into it. We had a lot of time to go over and a lot of time to bond and be together with this album. So, Culture 3. 6/11.”

Culture III has been cooking for quite some time now. The project was initially announced in 2018 and slated to drop in 2019, then delayed to 2020 and pushed back further due to Covid-19.

See The Album official tracklist below