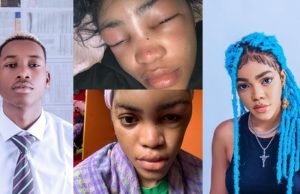 The singer made the headlines after his girlfriend’s brother accused him of domestic violence. Upon investigation by his former label, the singer’s contract was terminated and it was then reported that he had been detained by the Nigerian police. In a statement posted on his Instagram page after deleting all the photos on the platform,  he apologized for his actions and condemned all forms of violence be it domestic or otherwise.

He wrote, “Based on the wide range of incidents between I Sanni Goriola Wasiu and Iyomaterire Okeoghene Taiwo , I would like to inform my fans and loved ones that we are on top of the situation, we urge friends and fans of I, Lil Frosh to be at ease and to entertain fear or cause further rancour to this situation.We would also like to state that we condemn violence in all forms, be it domestic or otherwise. I sincerely apologize for my actions and inactions. Thank you.”

Cardi B Kisses Estranged Husband, Offset After He Gifted Her A Rolls Royce For Her 28th Birthday