Davido And T.I Set To Work Together?

Just days after announcing he just signed the biggest deal of his life with Sony Music Global, Davido, again took to social media to announce that he just finished a beat for American rapper, T.I and his label mate, Sina Rambo.

Just made something crazy for @Tip nd @SINARAMBO 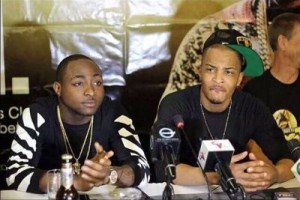 Recall the pair once met in Tanzania, while Davido was on a music tour.