These times are definitely not good for Psquare.

Just after, Jude Okoye, their manager dropped them as his artiste, reports now have it that their Omole Phase 1 home, has been placed under locks till further notice.

According to sources, this act was due to the brothers not showing up for an event they were billed to perform despite the fact that they had been paid a  day before the event. 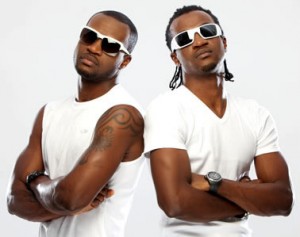 Sources further revealed that the brothers had been summoned by a court three times, but failed to show up.