2face, D’banj, P-Square – Who Was The Biggest Artiste Of Their Era? 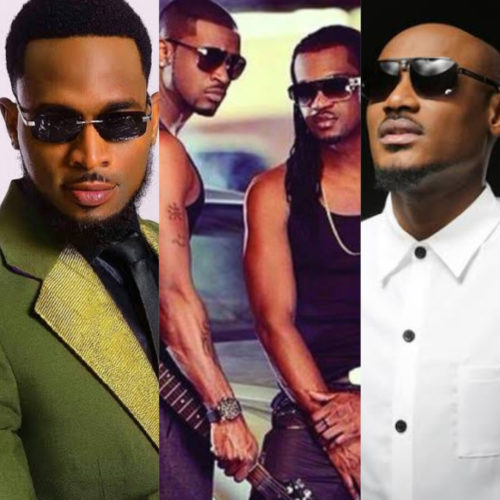 About 15 years ago, the competition that occurred in the Nigerian music industry was not overly limited to certain people unlike it is now.

During that era, there were a number of artistes who were very big and created keen competition for each other. We had the likes of 2face, D’banj, P-square, 9ice, Darey, Olu Maintain and a few more.

However, of all these artistes, there were three who stood out as ultimately the biggest of that era. 2face, D’banj & P-square were certainly the commandants of the Nigerian music industry.

Although they were all very big, people still argue a lot when they are obliged to narrow down to one the biggest artiste of that era. This makes a lot of people say 2face was biggest of all, some say it was D’banj while others say it definitely was P-square who was biggest.

This therefore has in some way caused an argument over here too, and in a way to help us put the argument to rest and have your opinion on the topic as well, we would like to know who you think was biggest.

2face, D’banj, P-square – Who was the biggest artiste of their era?

Nifemi is a graduate of the University of Lagos. He's a unique user of the pen when it comes to the expression of whatever. He is editor-in-chief of the organization and also a writer of news, articles, editorials and a lot more to help expand the level of knowledge of the readers and simultaneously have them entertained. A lover of music and football is who he is and a Man Utd die-hard.
Submit your comment
69 total pingbacks on this post