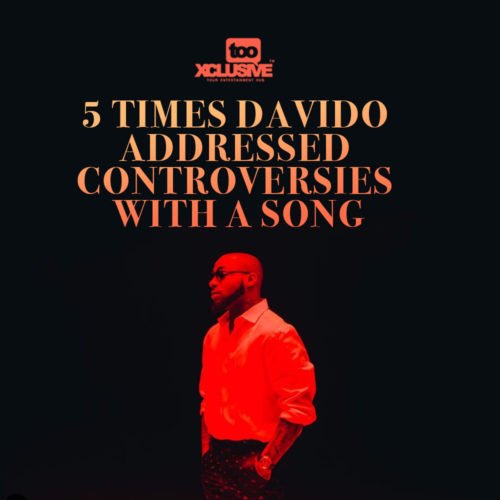 The late legendary Fela once said “music is a weapon,” if it’s a weapon to fight your haters, your oppressors or even yourself was not ourightly said by the legend, but one thing he was sure of is that “music is a weapon”.

Many of the new generation music artistes have certainly acted as a student of this philosophy in time past, especially Nigerian musicians, turning music into weapons, using it to address certain issues in their personal lives.

One Nigerian artiste that is most synonymous for using songs to address personal issues is Davido and that is why this post has led us to compile a list of songs that Davido has used one or two lines of to address one or two… issues in his life below.

Davido used this record to address arguably the most challenging controversy of his life. This song was put out after he was accused of being responsible for the death of his friend; Tagbo in 2017. You would recall that popular actress; Caroline Danjuma, who claimed to be Tagbo’s girlfriend, broke the news that Davido was responsible for Tagbo’s death which then resulted in a serious police case for the singer. Also the Lagos State commissioner of police was so hard on the case that he publicly called out Davido’s home address which the singer was very bitter about.

Although he came out victorious in the case, he still went ahead to drop lines that was directed to the commissioner of police and Caroline in the second verse of “Fia“. Davido sang, “Caroline save your drama, i don’t need it for a soap opera ooo, holdup holdup mr olopaa, i’m not here to cause wahala, hello diva save your drama, you don’t need me in your soap opera oo.”

Davido did not stop at “Fia”to shade Caroline Danjuma as he also did in DJ Ecool’s 2018 hit single; “Ada.” Davido in the pre-hook of the song sang; “Philomena i no mean am, that was a f**king mistake, what of Carolina, that one na gold digger” (referring to the role Caroline Danjuma played in the Tagbo controversy of 2017).

You would recall the controversy between Davido and baby mama; Sophia Momodu, in 2016 which had to do with whose custody their little daughter, Imade was supposed to be in at that time. It was really a huge controversy for the singer as social media was flooded with news of the issue.

Sophia blasted Davido and his family during those periods, that then made Davido take to social media to respond that she was only bitter because he wanted to travel with Imade without taking her and also not providing the outrageous demands she asked. Davido however took to the remix of Humble Smith’s single; “Osinachi” in which he was featured on, to throw shades at Sophia. Davido in the second verse of the song sang; “No be by force to go dubai, Abi na wetin cause the fight, And i just dey my own dey laugh eh, Because God dey my side, They want to take way my favour, They want to spoil my career, Them no know say I get flavour, You fit ask nabania, I forgive and i forget, Baba God knows the best, My papa just buy jet, And about to take off everywhere oh“

This record was Falz’s, it was released in 2016 and it featured Davido. OBO milked every opportunity he had on this song to shade Sophia Momodu’s Uncle; Dele Momodu. You would recall Dele Momodu involved himself in the saga between Davido and his cousin, lashing out at Davido on the internet. And in a way of paying back, Davido in the third verse of “Bad Baddo Baddest” used a particular line to shade the business mogul, singing “Mr Dele na my boy, Dele na my boy, If you come into my house you go see my toys, I get like hundred niggas wey dey protect me, So, if you love yourself motherfucker no dey vex me“.

You would recall the beef between Davido & Wizkid in 2017 which made Wizkid go on Twitter to tweet about Davido being local and not achieving the goal of penetrating the international market when he got his Sony Music deal as saying he has a frog voice.

Davido however did not reply immediately as he did what he knows how to to best. The singer took to Olamide’s 2017 single; “Summer Body” to respond to Wizkid as he sang; “With Yanky passport, them say we local oh, You better catch up, I go see you later“, Wizkid however replied the shade.

“5 Times Davido Addressed Controversies With A Song”, 5 out of 5 based on 1 ratings.