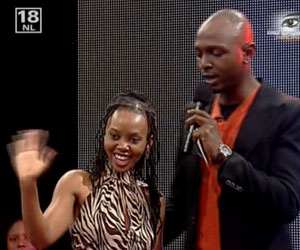 Nkuli became the third Housemate to be Evicted from Big Brother Amplified during the Live Show. She said she would miss Michael the most.She showed absolutely no emotion after IK broke it to her that she had been Evicted.IK had asked Kim, Luclay and Mumba to leave the stage and Nkuli was the only one left seated on stage.Nkuli wasn’t sure what would happen to her after IK announced that the three had had a great time in the House prompting her to start smiling.However, the three were whisked back into the House and once she saw them settling back in the House, she was certain of her fate.Nkuli also said she would miss Ernest, Nic and Alex the least, calling them two-faced.Namibia’s Jossy was the first Housemate to be Evicted from Big Brother Amplified. He was followed by Lotus this week, who was disqualified from the show after slapping Luclay.

“Big Brother Amplified -Nkuli Evicted!”, 5 out of 5 based on 1 ratings.