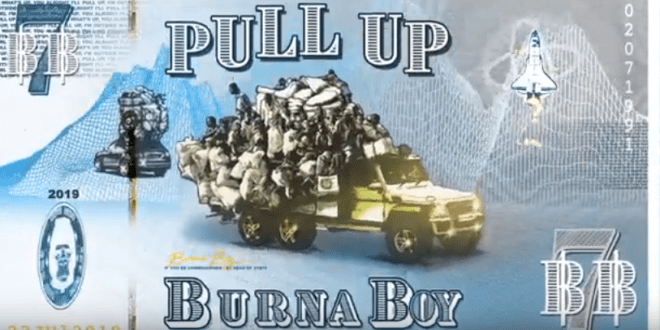 Burna Boy returns with “Pull Up“. Oluwaburna the African Giant who has been consistent which his craft and dishing out quality music and hits back to back comes through with a new tune.

The new record titled “Pull Up” is here to whet our appetite before the official release of his album. The much-anticipated album tagged “African Giant” is set for release on the 26th of this month. You can Pre-Order here: https://Burna.lnk.to/AfricanGiantID ,

With ‘Anybody‘ still buzzing heavily and topping charts, Burna Boy presents “Pull Up” a record you will fall in love with. It’s for those that want to see that special one who always runs through their mind & head. Burna sings about he can prove his love for his woman in a million ways that she would never understand.

Its visuals directed by Meji Alabi who is also responsible for the captivating visuals for “On The Low” was the first music video since the release of his acclaimed fourth album, “African Giant”, The simple and clean video was taken on the beautiful streets of London with beautiful black women donned in natural hairstyles and striking attires.  This track demonstrates once again that Burna Boy is on his way to conquer the international music scene.

So what up? You alright?
I pull up, I’m outside
What’s up? You alright?
Pull up, girl I’m outside
A million ways I swear I prove you wrong (you wrong)
‘Cause I love you for life, you no go understand
Na small thing, if I burst out millions for you (for you)
Girl I no even mind, I no go think twice