Burna Boy VS Naira Marley – Who Deserves 2019 Artiste Of The Year? 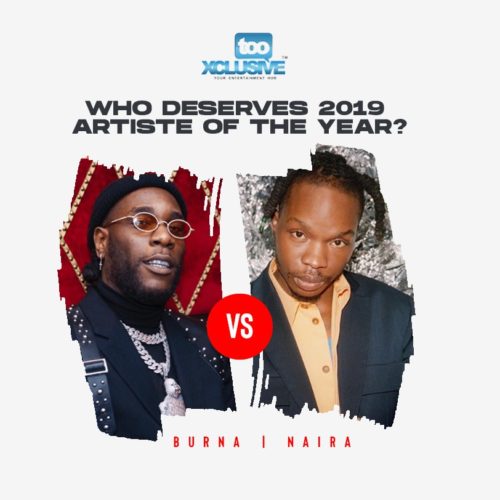 It has been a great year for both Burna Boy and Naira Marley as the two Nigerian music superstars have both dominated the music proceedings in Nigeria within the year.

These two have been the most talked about Nigerian music stars this year as well as the music stars that have achieved the most, plainly with their music. However, for the sake of one necessity in music which is competition/comparison, i would like to briefly evaluate these two stars’ individual achievements in the music scene in 2019 after which i would urge you to pick who you think deserves to be the artiste of the year.

Burna already kick-started his own 2019 in December 2018 with the release of his massive hit-single, “Killin Dem” featuring Zlatan which turned-out to be a massive force in 2019 due to its massive acceptance and unrivalled influence on music enthusiasts. After that beast of a record, Burna proceeded to drop “Dangote” which resonated with music lovers and did well in its own huge way.

After “Dangote,” Burna moved-on to dropping another massive single; “Anybody” which till now still does well with music fans. With no signs of weakness shown, the “African Giant” decided to wrap-up the year with his 5th successful studio album; “African Giant,” which just recently became the first modern-day Afrobeat music project to be nominated for a grammy award. Apart from his music works, Burna Boy embarked on a massive tour of the world, performing at several cities in Africa, North America and Europe. He has also won numerous awards, one of which is the BET Best African Act award. All in 2019.

Naira’s name has never been as big as Burna’s even before they both became established music superstars. All the music artiste has become today sub-consciously and luckily started in this year alone. Someone that i always describe as a product of grace and a smart-hardworking-opportunist. Naira Marley made the most of the unfair side of life that came his way. He encountered a turbulence that naturally would signalle the end of many, but he in particular stood tall, brought to the fore his bravery and made a permutation that wouldn’t even occur to a few people in such a challenging situation (a permutation that made him realize his challenging situation was a golden opportunity to become the reality of his dream). It would be surprising to you if you are a new follower of Nigerian music that Naira Marley, the man that sang the hit single, “Soapy” has been to jail in 2019 already. I know right?

It would interest you to know that apart from “Soapy” he also has other massive records within the year. Records like “Am I A Yahoo Boy,” “Opotoyi,” “Mafo” are several of his records in 2019 that have proven to be some of the biggest records in the Nigerian music industry. Hunted by his lewd lyrics, some part of the Nigerian music industry still feel he isn’t a worthy candidate for award consideration, but if the impact of songs are solely what is considered in giving awards, then it would definitley not be a surprise if Naira Marley goes home with the most number of plaques at award ceremonies come the time the year 2019 is put under review of award organizers. Nobody has more hit songs than Naira Marley in the Nigerian music industry in 2019 and it is the most obvious fact.

Did i forget Marlians, their genesis, their current influence and power and how their president has been able to sustain their industry relevance? That’s a topic for another day. But before then, answer to this important question; Burna Boy VS Naira Marley – Who Deserves 2019 Nigerian Artiste Of The Year?

Nifemi is a graduate of the University of Lagos. He's a unique user of the pen when it comes to the expression of whatever. He is editor-in-chief of the organization and also a writer of news, articles, editorials and a lot more to help expand the level of knowledge of the readers and simultaneously have them entertained. A lover of music and football is who he is and a Man Utd die-hard.
Submit your comment
70 total pingbacks on this post
Click here