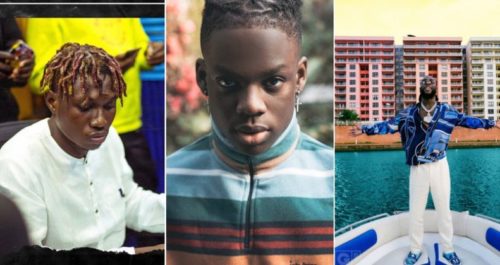 Zlatan and Naira Marley made the headlines yesterday when they made some insensitive remarks about the coronavirus and Twitter users were quick to call out the singers for using their platforms in the wrong way. Well Zlatan is in the news again and this time it’s for ridiculing Rema’s 2020 smash hit “Beamer’

In a video that has gone viral, Zlatan and Burna Boy could be seen vibing to the track but what caused a stir was the fact that Zlatan was mumbling the lyrics and Burna immediately joined in too and both singers started laughing . Thousands of fans took to their accounts to slam the singers for behaving in such manner while others defended them saying they were just catching “cruise”.

Here are some of the reactions below:

Only problem is that this isn’t the first time Zlatan is doing this to a Rema song. And we all know how salty Burna normally is so……. https://t.co/8DsBrrY6sZ

Nigerians can literally swallow panadol 4 headache they’re nt having. Did Rema ask y’all 2b his defense attorney? Zlatan & burna boy were having a swell time; chopping mouth to his lyrics. How many times av u done it? Did u do it to ridicule the artist? Shut up & stay at home! pic.twitter.com/ug2Zy4klFt

I don’t think burna boy and zlatan were making fun of rema. Just normal cruise… If I was so sing any of Rema’s song I’ll probably do the same! Just saying tho…

??? i find that funny, like i do what zlatan did whenever i dont know the lyrics to a song. The way people reason is different sha. https://t.co/ekxTFOdRVc

Wait Burna Boy and Zlatan they use style dey shade REMA?. Let me not talk before they say atun ti De?. É deY pain me sha?. Well Rema didn’t pave way for himself so what does he know?

Zlatan and Burna boy were catching cruise in this video. I don’t see any ridiculing.
A lot of people do say Rema speak in tongues. So what’s the big deal if Zlatan doesn’t know the lyrics? Considering he’s a moron ? https://t.co/uBSwmH3Nq7

With the way Zlatan and Naira Marley are talking, you’d think they have more money than DJ Cuppy who doesn’t shame anyone despite getting a lot of unnecessary hate. I know the people to blame sha.

Look at Zlatan and Burna trying to ridicule Rema, man is 20 and is already a hit monster

Rema is actually better than Burna Boy and Zlatan but we are just not ready to say it…. because it’s the fact.

I understand that Zlatan can be very annoying sometimes but if we look at things on a neutral ground, Burna boy, Zlatan and those in the videos were just catching cruise.
I don’t feel they were mocking Rema.
Come on, many of us do these things when we are having fun. Relax na