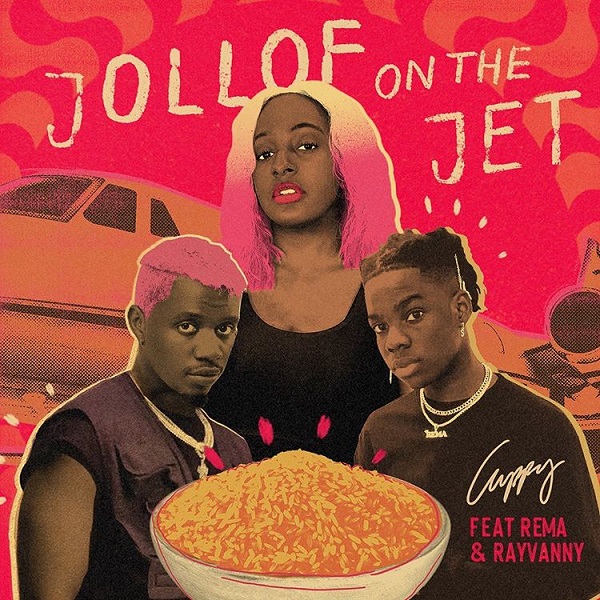 Nigerian female disc jockey, Cuppy teams up with Rema and Rayvanny to kick start 2020 official with a brand new single dubbed “Jollof On The Jet”.

“Jollof On The Jet” performed by Cuppy, Rema and Rayvanny … Cuppy releases her first single of the year 2020 titled; “Jollof on the Jet”, The global performer has announced this as the lead song to her upcoming debut Album ‘Original Copy’. This new tantalizing single features Mavin golden boy; Rema alongside Tanzanian superstar, Rayvanny.

Florence Ifeoluwa Otedola, also known as DJ Cuppy or Cuppy is a Nigerian DJ, Artist and Curator. She is one of Africa’s most well known and international DJ with musical hits under her belt. She has been chasing her calling ever since. She does this on the decks as a DJ, in boardrooms as a music businesswoman and even behind the mic as a producer and vocalist. In 2014, Cuppy graduated with a degree in business and economics from King’s College London. She had already started DJing as a teenager and built a reputation as one of the foremost DJs in Africa when, also in 2014, Cuppy was selected as a DJ at the MTV Africa Music Awards. Her musical hits include; ‘Gelato‘ ft. Zlatan, ‘Green Light‘ ft. Tekno, ‘Vybe‘ ft. Sarkodie, ‘Currency‘ ft. L.A.X, ‘Werk‘ ft. Skuki and ‘ABENA‘ ft. Ceeza Milli, Shaydee and Kwesi Arthur.

While we anticipate her debut album tagged ‘Original Copy’ she warms us up with this new tune ‘Jollof On The Rice‘. The two raving African musicians she featured murdered this AfroPop tune produced by Killertunez.