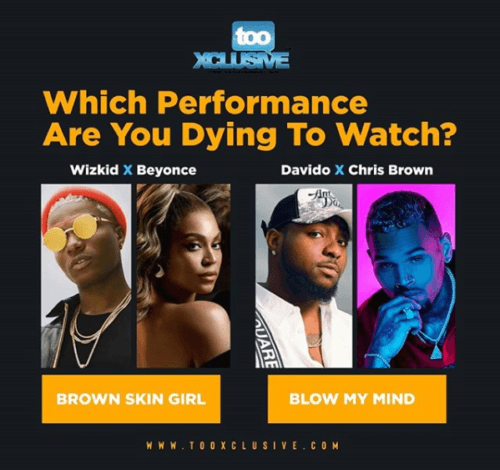 The past couple of weeks have been mostly about a talk, argument or face-off between Davido’s “Blow My Mind” featuring Chris Brow and Beyonce’s “Brown Skin Girl” featuring Wizkid.

Lots of music fans are really torn-apart on which is the better song or greater hit as it involves 2 Nigerian music arch-rivals and 2 American music superstars.

These songs have set a trend on social media as almost every major topic discussed has been centred around them. However, this publication is really not about the might and strength of the songs but more about the recipients of the songs.

“Davido’s “Blow My Mind” Ft Chris Brown Vs Beyonce’s “Brown Skin Girl” Ft Wizkid – Which Performance Are You Dying To Watch?”, 3 out of 5 based on 22 ratings.

Nifemi is a graduate of the University of Lagos. He's a unique user of the pen when it comes to the expression of whatever. He is editor-in-chief of the organization and also a writer of news, articles, editorials and a lot more to help expand the level of knowledge of the readers and simultaneously have them entertained. A lover of music and football is who he is and a Man Utd die-hard.
Submit your comment
83 total comments on this postSubmit yours
VIDEO OF THE WEEK
Popular Posts