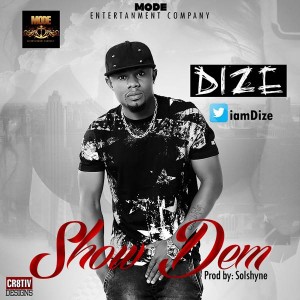 Eze Lawrence Chibuzor aka DIZE hails from Imo State. Dize started his musical career way back in 2008 with a song He titled “I Can’t Do Without You” produced by I D Cabasa.

He is signed to Mode Entertainment Company. Dize is back with a new track titled “Show Dem” produced by Solshyne.  Download and share your thoughts.