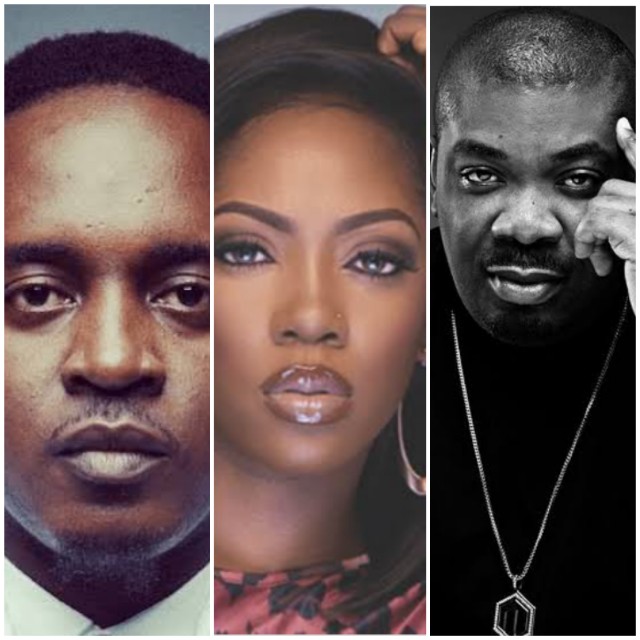 Nigerian singers, Don Jazzy, Tiwa Savage, and MI Abaga have reacted to the rape accusations leveled against their colleague, D’Banj.

D’Banj had reportedly had his accuser, Seyitan who accused him of rape back in 2018 arrested by the police. D’Banj allegedly made her sleep in the cell with criminals and made her reenact her statement. This angered Nigerians who called him out and even vowed to cancel him by making him lose his endorsements. This also generated reactions from MI Abaga, Tiwa Savage and Don Jazzy.

Tiwa Savage who recently set up a platform that helps rape victims find their voice reacted to the reports stating that the story is heartbreaking for her and clearly stated that her view about rape is still the same.

I hear you all and even though this is heartbreaking for me, my view is still the same. I stand strong with the victims of all sexual abuse so I say this: 1. Victims should always speak out n speak their truth 2. those found guilty must be punished to d full extent of the law.

MI took to Twitter to commend those who have worked tirelessly to fight against intimation and gender-based violence. He stated that him not speaking out would mean that he supports the women to shut up and not tell their story

Society will not improve if we do not tear down the systemic methods by which women and girls who accuse people of violating them are silenced. There can be no sacred cows on this issue..

To the brave women like Kiki Mordi @AyodejiOsowobi and @ozzyetomi who used their platform to fight over the last few hours.. thank you for your courage and leadership.. to all organizations silently working on the behalf of victims of gender based violence.. thank you

Some days I am ashamed to be a man because of how much we have failed our sisters, mothers, friends and daughters.. today is one of those days.. and I know if I do not speak out today I will be complicit in a system that tells women.. “shut up and don’t say anything”

Don Jazzy on the other hand who happens to be a very close friend of D’banj revealed that the case saddens him but he is not competent to judge or investigate and do justice. Jazzy added that no matter how long a lie lasts, the truth will always prevail.

No matter how long a lie lasts, the truth will always prevail. The fact is that one of them is a victim and the law will protect that person. I stand firmly against rape and all injustices against women, children and everyone including oppression. I urge all victims to speak out

and report to the appropriate quarters. It is also important that every accused person is given an opportunity to set the facts straight. For most of us, all we have is the good name our parents have given us and we must protect and bequeath to our own successors.

This particular case saddens my soul but I am not competent to investigate or judge this matter. I implore the police to thoroughly investigate and courts to do justice.

“Don Jazzy, MI Abaga & Tiwa Savage React As D’Banj Reportedly Arrests His Rape Accuser, Seyitan”, 5 out of 5 based on 1 ratings.