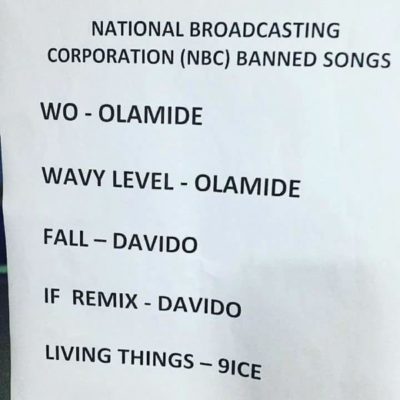 The National Broadcasting Corporation (NBC) has tagged five Nigerian songs as “Not to be Broadcasted”.

The corporation released the list, saying it has banned the 5 songs from being aired.

The Federal Ministry of Health had said in a tweet on Friday that the video to Olamide’s “Wo” is in violation of the Tobacco Control Act 2015.

Banky W Tells Off Female Fan “I’m Married, Don’t Touch Me Like That”

Banky W Tells Off Female Fan “I’m Married, Don’t Touch Me Like That”