The singer reacted to the controversial senator’s post on Instagram of him smiling behind his fleet of expensive cars. Speedy pointed out that there’s no way Dino could have amassed such wealth in such a short time as his only job was to be a senator. He believes Nigerian senators are not paid to an extent where they get to acquire such exotic toys.

He wrote, “Oh my God look at one man’s wealth and all he had to do was be an Nigeria senator. Good thing he did not win governorship they broke his leg during that election, no one man should have this much wealth and his only job was to be a senator “ 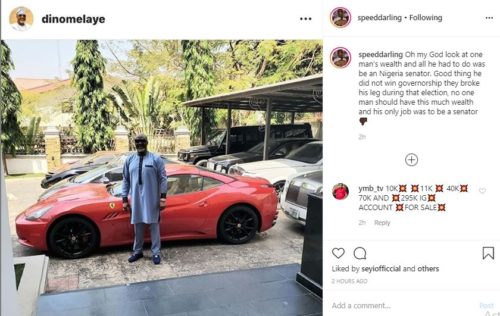 “”No Man Should Have This Much Wealth”- Speed Darlington Slams Dino Malaye For Flaunting Exotic Cars”, 2 out of 5 based on 3 ratings.